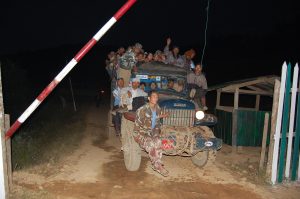 People crossing the India-Myanmar border at Manipur by truck, January 31, 2009

An ambush of an Assam Rifles convoy in Manipur’s Churachandpur district on Saturday morning, which killed a commanding officer, his wife, and their 5-year-old son as well as four other security personnel, has set alarm bells ringing about the security situation in the border state.

Two separatist groups, the People’s Liberation Army and the Manipur Naga People’s Front, have claimed responsibility for the attack.

The attacks, which also left at least six other personnel injured, have turned the spotlight on the decades-old insurgency in Manipur.

Apparently, the attack was planned and executed from their camps based in Myanmar. This has triggered calls for erecting a fence along the India-Myanmar border to curb the increasing cross-border criminal activities between the two countries.

Manipur Chief Minister N. Biren Singh has announced that fencing the state’s border with Myanmar was a priority for the government to check “infiltration.” He explained that the central government had already sanctioned funding for the project but it has been stalled owing to disputes in some zones.

The India-Myanmar border spans a long distance of 1,643 kilometers, most of which is hilly terrain. Besides Manipur, the other Indian states that share a border with Myanmar are Arunachal Pradesh, Nagaland, and Mizoram.

A “free border regime” exists along the entire stretch of the border, which allows citizens from one country to travel up to 16 kilometers on the other side. Communities speaking the same languages and sharing the same customs and belonging mostly to the Naga and Kuki-Chin-Mizo ethnic groups reside on both sides of the border.

Get briefed on the story of the week, and developing stories to watch across the Asia-Pacific.

As many as six separatist rebel outfits from India’s Northeast and mostly from Manipur have camps and training facilities at some places in in Myanmar. Over the past several decades, attacks have been mounted on security forces in India by these groups from their bases in Myanmar.

One of the worst such attacks was on June 4, 2015 when a combined squad of rebels ambushed a vehicle of the Indian Army in Manipur, killing 20 soldiers.

Early in 2019, the Tatmadaw, as the Myanmar’s military is known, dismantled most of these camps located in the Naga-inhabited northern region of Sagaing Division. The exercise, codenamed Operation Sunrise, was the outcome of an understanding arrived at by the two governments, which also entailed the engagement of the Indian Army to check the influx of rebels from Myanmar into India’s Northeast.

Besides the activities of militant outfits, a variety of drugs such as Yaba, World Is Yours, Heroin, and Brown Sugar are being smuggled from Myanmar to India’s Northeast, from where they are then dispatched to different destinations through well-established networks.

The same routes are also used by smugglers to import other contraband items such as gold from Myanmar. Authorities have confiscated consignments on several occasions over the past several years.  Some Indian government officials are of the view that a section of the Tatmadaw is involved in mining and smuggling of gold from the mines of Sagaing Division.

Manipur’s border with Myanmar is 398 kilometers, but only 40 kilometers have been fenced so far.  Border disputes have triggered protests and opposition by local groups. This has compelled the government to halt the project at some locations.

In 2013, several civil society organizations in Manipur threatened to launch an agitation if the government went ahead with the fencing project. The protest was sparked after an attempt was made by Myanmar soldiers to set up a temporary camp inside Indian territory near the border town of Moreh.

Again in 2018, a similar situation unfolded at another location north of Moreh at Kwatha Khunou where local inhabitants alleged that Myanmar had made attempts to change the boundary. A popular civil society organization called the United Committee Manipur (UCM) had warned the government to stop the fencing until the dispute had been resolved.

Opposition to a fence had also surfaced in Nagaland, which is another state in India’s Northeast bordering Myanmar and contiguous to Manipur. Work on fencing had to be shelved within a few months after it was begun in Noklak following opposition from local groups. The rationale of the project was to check the movement of militants from their bases in Myanmar.

Arunachal Pradesh, located north of Nagaland, had also approached the central government some years ago to execute a similar fencing project in the districts bordering Myanmar to check militancy. So far, the scheme has not been executed.