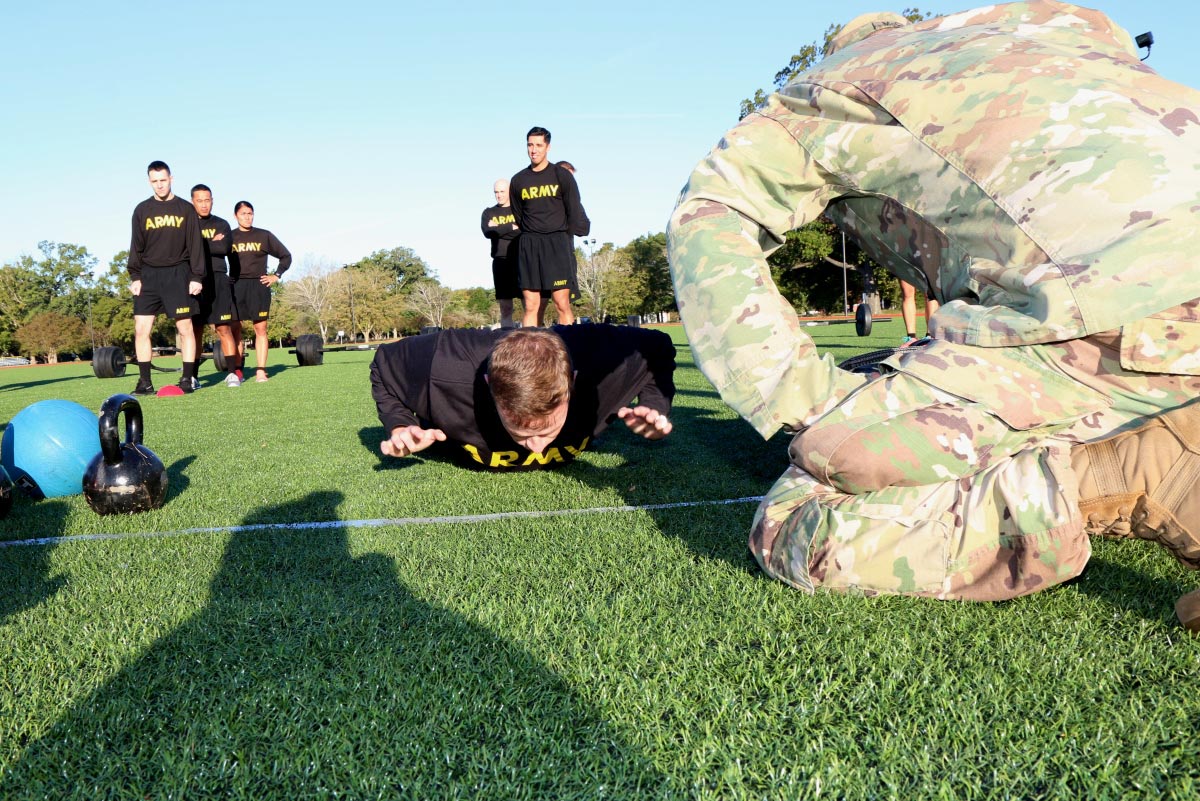 FORT EUSTIS, Virginia — Army fitness officials here are still experimenting to determine the technique soldiers will have to master when they take the Army Combat Fitness Test for record in October 2020.

The Army began a large-scale field test of the six-event ACFT on Oct. 1, sending mobile training teams out of Fort Jackson, South Carolina to train and certify graders in more than 60 battalions across the active, National Guard and Reserve force.

The exercises are locked in, but the mechanics may change to make them easier to grade, Whitfield East, the research physiologist for Center for Initial Military Training, told Military.com today at an ACFT demonstration.

“During the field test, we are refining the hand-release pushup,” East said, explaining that event will either have soldiers raise their hands straight up off the ground before coming back up or extend their hands out to the sides and bring them back in again before coming up again.

The arm-extension version may be easier to grade, East said.

“More or less, the point of it is to ensure that they are totally resting on the ground. We don’t want them in a low hover over the ground,” East said.

The arm-extension also “engages a little bit of the … muscles in the back,” East said, adding that “it is good to link movements together, so a pull-type movement and a push-type movement.”

“Biomechanically, and from a combat specificity point of view, both work pretty well, but we really want to make sure we are getting a gradable event,” he said.

Sgt. 1st Class Brandon Estes, who participated in the ACFT demonstration, said he prefers the technique that involves simply raising the hands up rather than extending them out to the side.

When the hands are brought back in from the arm extension, “your hands might be too far out and the pushup wouldn’t count,” said the 37-year-old Apache maintainer, who is normally assigned to B Company, 1st Battalion, 210th Aviation Regiment.

While no decision has been made yet, East said practice will help solve Estes’ concern.

“It’s really simple to know where your fingers are, because your arms just stop when the outsides of your thumbs touch your chest,” he said.

Capt. McKenzie Hensley has no real preference for either technique, but said that both are harder than the standard pushups on the current Army Physical Fitness Test.

The Army chose the hand-release pushups because they increase the force on the body “somewhere in the neighborhood of 25 percent,” East said.

“What we are seeing is about a 30 to 50 percent decrement in total pushup performance when we do that hand-release pushup, which is really a good thing,” he said. “Intensity is really more important than useless repetition. So if I can get 40 to 50 hand-release pushups, I am better off in terms of shoulder wear and tear … than I am doing 80 or 90 of the other types of pushups.”

Feltwell agreed, adding that “a longer movement recruits more cells in the muscle, so it’s harder to do. That’s what we want.”

“Faster movements don’t do that,” he said. “Highly repetitious exercises are generally going to become more injurious over time.”

Editor’s Note: This story has been updated to correct the role of a soldier.