Top diplomats from India, the US, Israel and the United Arab Emirates (UAE) held a virtual ministerial meeting on Monday, which has been lauded as a first step towards expanding quadrilateral cooperation in the Middle East and Asia.

India’s External Affairs Minister Subrahmanyam Jaishankar, Foreign Ministers Yair Lapid of Israel and Sheikh Abdullah bin Zayed of the UAE were joined by US Secretary of State Antony Blinken to discuss “working together more closely on economic growth and global issues,” and agreed on an ” expeditious follow-up,” Jaishankar tweeted after the meeting.

Jaishankar arrived in Israel on Sunday, and he appeared side by side with Lapid during the virtual meeting.

At a business roundtable along with government officials and CEOs on Sunday in Jerusalem, Jaishankar said that Israel was in many ways India’s “most trusted and innovative partner,” the Times of Israel news website reported.

“The degree of trust between us is very high,” Jaishankar said.

After Monday’s meeting, Israel’s Lapid praised the grouping’s “unique set of capabilities, knowledge and experience that can be used to create the network that we all want to see created.”

“The key to success is how quickly can we move from ‘government-to-government’ to ‘business-to-business’? How quickly can we turn this into a working process that will put boots on the ground, changing infrastructure around the world,” the foreign minister said.

After the meeting, there was agreement on forming a joint working group to come up with ideas for cooperation on economics, technology, transportation and security, India’s Economic Times newspaper reported.

Talks build on the Abraham Accords

The virtual meeting takes place about a year after the Abraham Accords were signed in Washington, which started the process of normalized relations between Israel and the UAE.

The accords then opened up parts of the Gulf to Israel and vice-versa, marking an end to decades of mistrust.

Since then, Israel has opened embassies in UAE and Bahrain, an unprecedented 130,000 Israeli tourists have visited the UAE and the UAE-Israel Business Council was set up.

Officials showed enthusiasm for continuing the momentum on the back of the Abraham Accords.

A US State Department statement released after the virtual summit said Secretary Blinken reiterated US support for the Abraham Accords, and “discussed future opportunities for collaboration in the region and globally” with the other diplomats.

This includes expanding economic and political cooperation in the Middle East and Asia, including through trade, combating climate change, energy cooperation, and increasing maritime security.

A new type of ‘Quad’ for the Middle East?

India already is already part of the so-called Quadrilateral Security Dialogue (Quad) with US, Australia and Japan to ensure a “free, open and rules-based Indo-Pacific” amid the backdrop of a rising China.

However, any similar quadrilateral cooperation in the Middle East is likely to focus more on fostering economic, technology and development ties, rather than the security-oriented dialogue aimed at the Indo-Pacific.

Nevertheless, India-Israel cooperation on counterterrorism and defense has expanded over the past few years. Israel has been one of the largest suppliers of military hardware to India with defense trade between the two countries valued at about $1 billion annually.

Energy and economic ties between India and the UAE have also expanded significantly.

Experts say that cooperating with Israel, the US and the UAE can allow India to deepen engagement with Israel without harming its relationship with other Arab states in the Persian Gulf.

“The possibilities for New Delhi are immense,” Lakshmi Priya, an analyst from the Manohar Parrikar Institute of Defense Studies and Analyses told DW.

She said India could benefit from development led by Israeli technology and UAE investment while contributing human resources and a large consumer market.

“It is an example of India’s extending ties with the Gulf countries as it moves beyond energy, trade and remittances,” she added.

Former Indian diplomat, Deepa Gopalan Wadhwa told DW that the institutional framework of a potential Middle Eastern “Quad” could follow the evolution of the Indo-Pacific version.

“Areas of cooperation are similar, although the geopolitical challenges differ.” 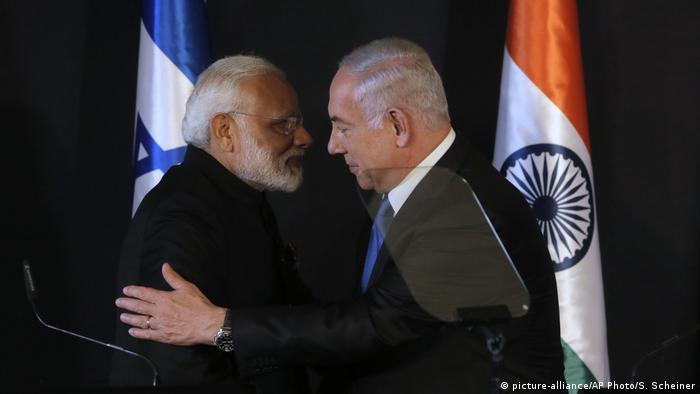 “The new Quad in the Middle East is unlikely to be India’s only new coalition in the region,” he said. “It provides a sensible template to pursue wide-ranging ‘minilateral’ partnerships in the region.”

Indian foreign policy in the Middle East long defined the US as a destabilizing factor. New Delhi therefore kept a reasonable political distance from Washington’s strategic policy in the region.

By deepening cooperation with the Quad in the Indo-Pacific, and now stepping towards building better ties with countries to the west, experts say India is shifting its foreign policy priorities.

“Unlike other groupings where India is a member, this would be results oriented,” P R Kumaraswamy, professor of contemporary Middle Eastern studies at Jawaharlal Nehru University, told DW.

“The other three countries are more eager for results and hence their approach will force India to go beyond words,” he added.

“Even if it does not become a structured organization, the mini-Quad will force India to abandon its perennial problem of not walking the talk,” he said.