China has laid claim to the entire Galwan Valley on the Himalayan border where Chinese and Indian troops fought in a deadly midnight battle using spiked clubs and rocks just days ago.

The midnight brawl in part of the disputed Ladakh region along the Himalayan frontier was the deadliest in 45 years. Some 63 soldiers are thought to have been killed.

It comes after it was revealed China appears to have sent bulldozers to divert the course of a river near the disputed border where soldiers fought at 14,000 feet on Monday, satellite images suggest.

India blamed China for instigating the fight by developing infrastructure in the valley, which it said was a breach of the agreement regarding the disputed land.

Chinese Foreign Ministry spokesman Zhao Lijian said in a statement that ‘the Galwan Valley is located on the Chinese side of the Line of Actual Control in the west section of the China-India boundary’.

He blamed incursions by Indian troops in the area from early May for a midnight clash on Monday that left 20 Indian soldiers dead. China has not said whether its side suffered any casualties, but reports have suggested the number of casualties could be as high as 43. 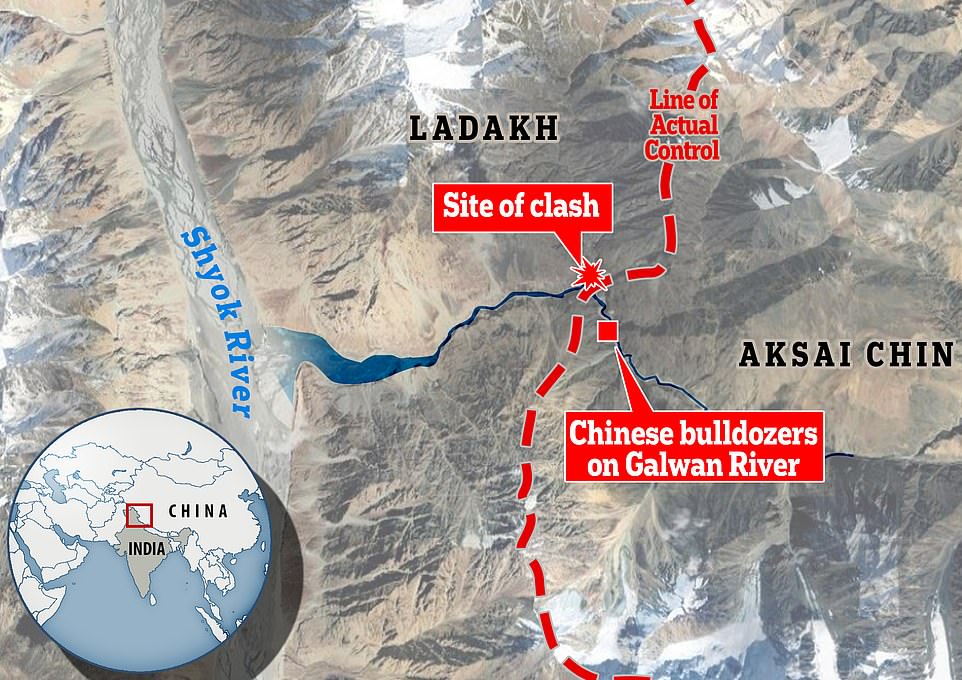 This is the Galwan valley where the brawl between Indian and Chinese soldiers took place. The unofficial border between the two countries runs through the middle of the photo on the dotted red line. The Chinese bulldozers appear to have been diverting the river on the right of the photo, on their side of the border. The Indians have built a bridge over the river downstream on the left of the picture 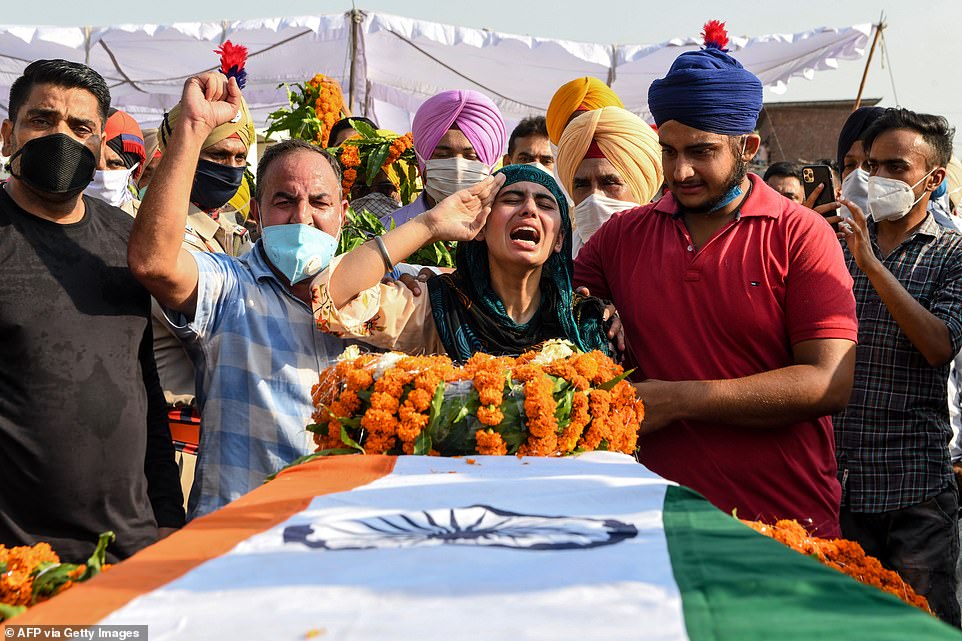 Sandeep Kaur (center) and her brother Prabhjot Singh (second right) react after laying the wreaths of flowers on the coffin of their father and soldier Satnam Singh who was was killed in a recent clash with Chinese forces in the Galwan valley area, during the cremation ceremony at Bhojraj village near Gurdaspur on Thursday, June 19 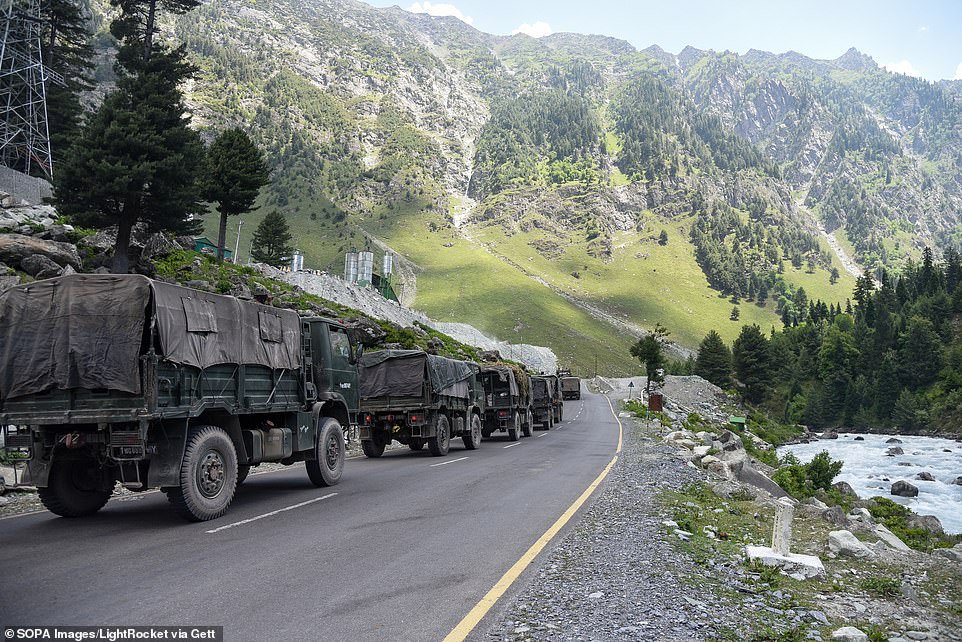 Indian army convoy moves along the national Highway leading towards Ladakh. India and China held talks again on Thursday, 18 June to cool down the situation in the area where violent clashes between Indian and Chinese soldiers took place on Monday night 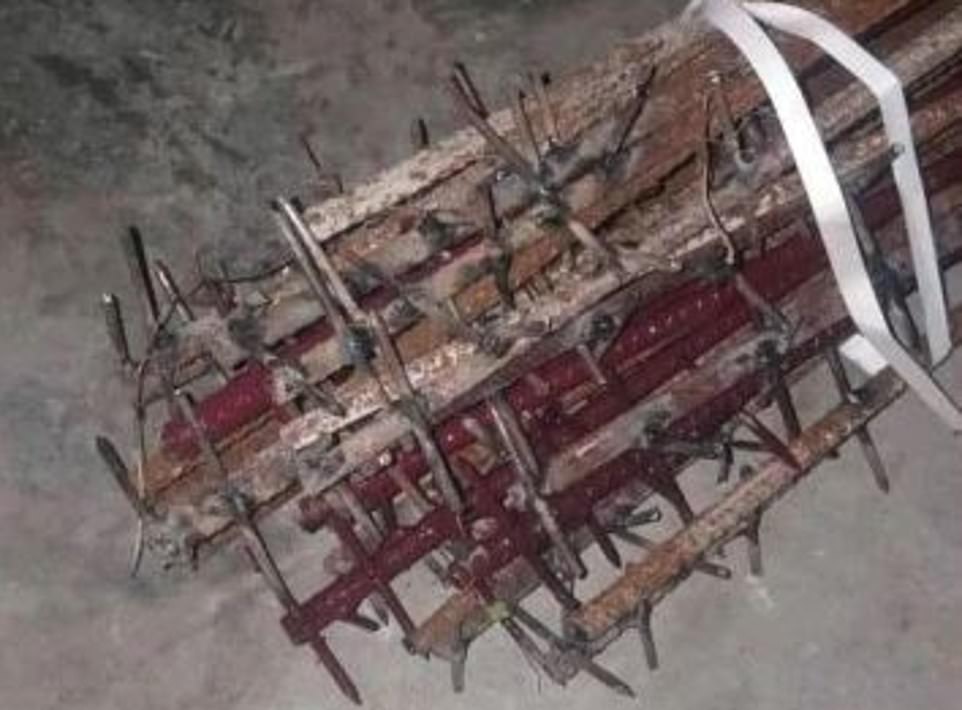 Sticks with nails embedded on them were used to attack the Indian soldiers in LadakhIn the worst clash between Indian and Chinese troops in over five decades. The 16 Bihar Regiment, led by Col Santosh Babu, that took on the Chinese army on the narrow ridge in Galwan Valley were pelted with stones and beat up with clubs covered in nails 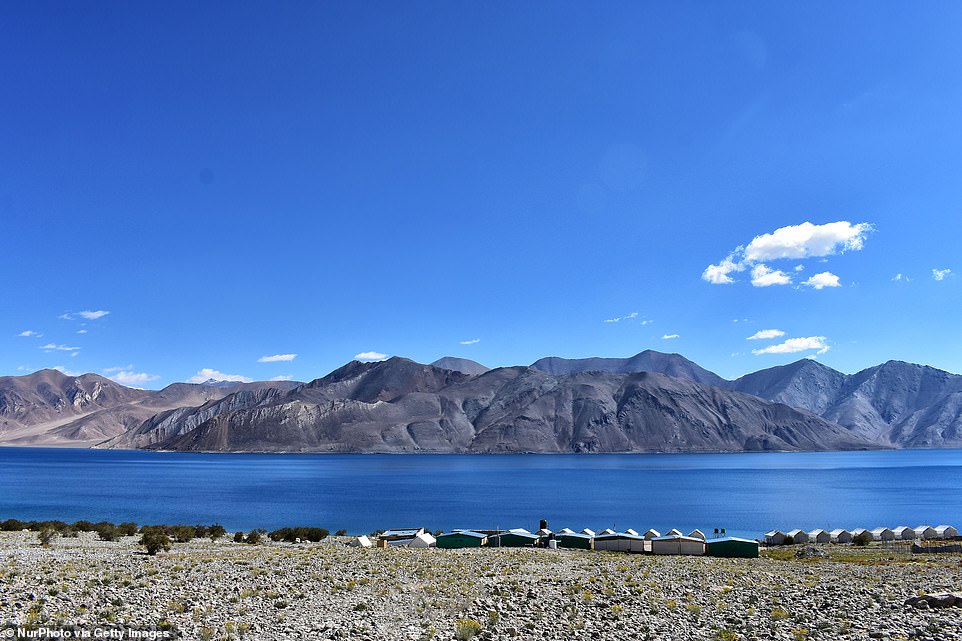 A panoramic view of Pangong Lake in Ladakh Valley on September 13, 2018. The valley falls within a remote stretch of the 2,100-mile Line of Actual Control – the border established following a war between India and China in 1962 that resulted in an uneasy truce 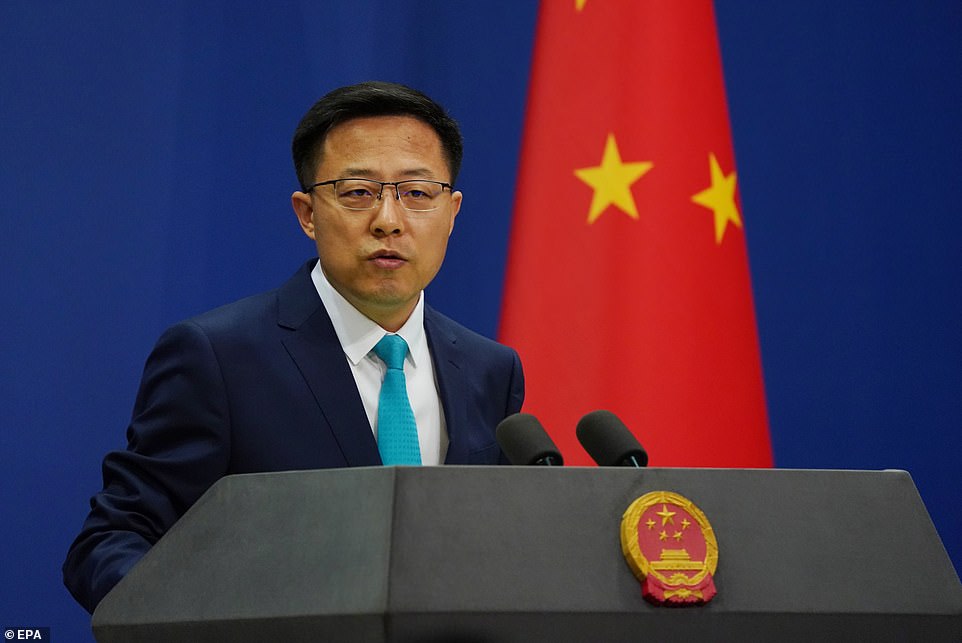 Chinese Foreign Ministry spokesman Zhao Lijian (pictured) said in a statement that ‘the Galwan Valley is located on the Chinese side of the Line of Actual Control in the west section of the China-India boundary’. He blamed incursions by Indian troops in the area from early May for a midnight clash on Monday that left 20 Indian soldiers dead 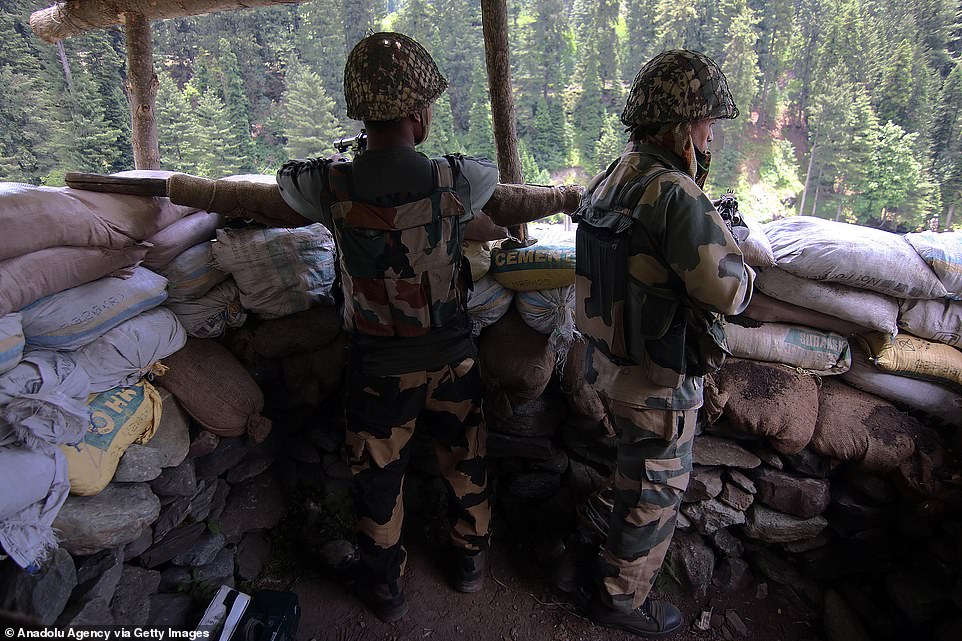 The midnight brawl in part of the disputed Ladakh region along the Himalayan frontier was the deadliest in 45 years as 63 soldiers are thought to have been killed. Pictured, Indian border security forced keeping vigil from a military bunker along the Srinagar-Leh National highway on Wednesday, June 17

Soldiers brawled with clubs, rocks and their fists in the thin air at 14,000 feet above sea level but no shots were fired, Indian officials have said. The soldiers carry firearms but are not allowed to use them under a previous agreement in the border dispute.

Indian security officials have said the deaths were caused by severe injuries and exposure to sub-freezing temperatures.

The valley falls within a remote stretch of the 2,100-mile Line of Actual Control – the border established following a war between India and China in 1962 that resulted in an uneasy truce.

India’s Ministry of External Affairs spokesman Anurag Srivastava declined to comment on China’s claim to the valley. But Prime Minister Narendra Modi said in a meeting with political opposition leaders on Friday that ‘neither anyone has intruded into our territory, nor took over any post’.

Mr Modi said India was ‘hurt and angry’ about the deaths of its troops. He said India wanted peace and friendship, but had the ‘capability that no one can even dare look towards an inch of our land’. 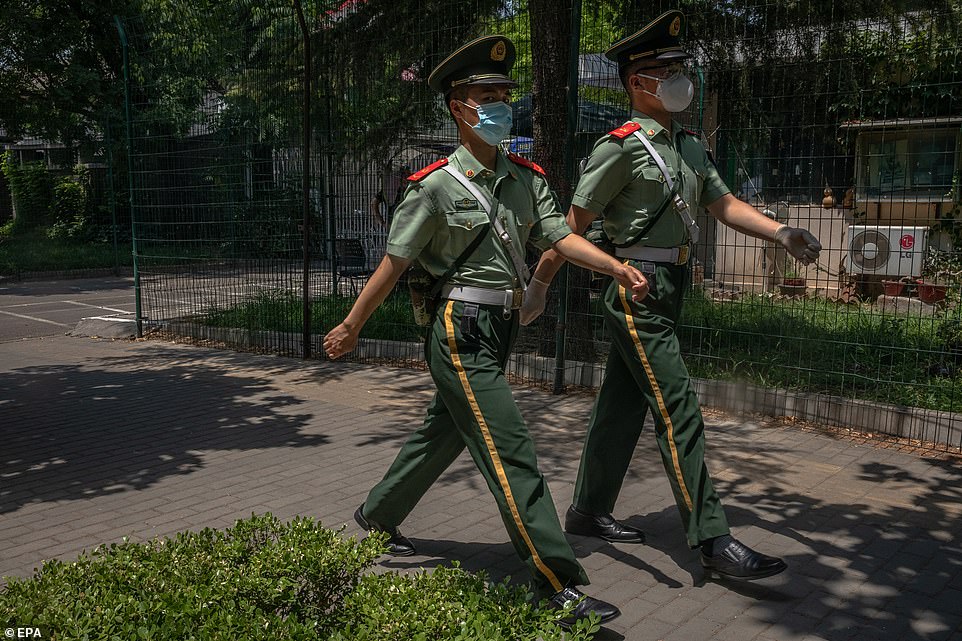 It comes after it was revealed China has sent bulldozers to divert the course of a river near the disputed border where soldiers fought at 14,000 feet on Monday, satellite images suggest. India blamed China for instigating the fight by developing infrastructure in the valley, which it said was a breach of the agreement regarding the disputed land. Pictured, Chinese paramilitary police officers march at an embassies area in Beijing, China on Thursday 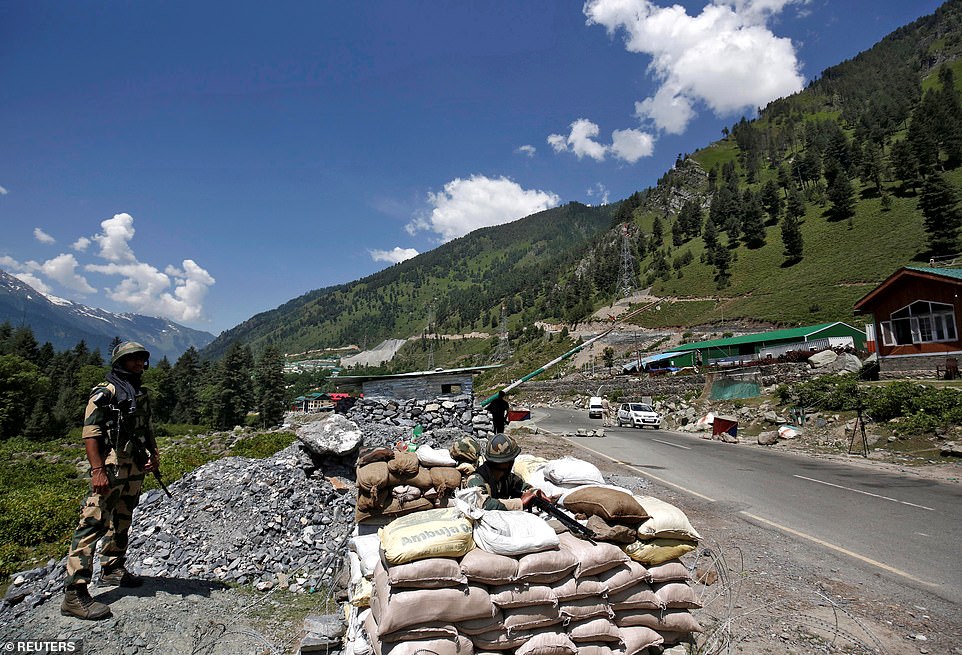 On Monday soldiers brawled with clubs, rocks and their fists in the thin air at 14,000 feet above sea level but no shots were fired, Indian officials have said. The soldiers carry firearms but are not allowed to use them under a previous agreement in the border dispute. Pictured, India’s Border Security Force (BSF) soldiers stand guard at a checkpoint along a highway leading to Ladakh, at Gagangeer in Kashmir’s Ganderbal district on Wednesday, June 17 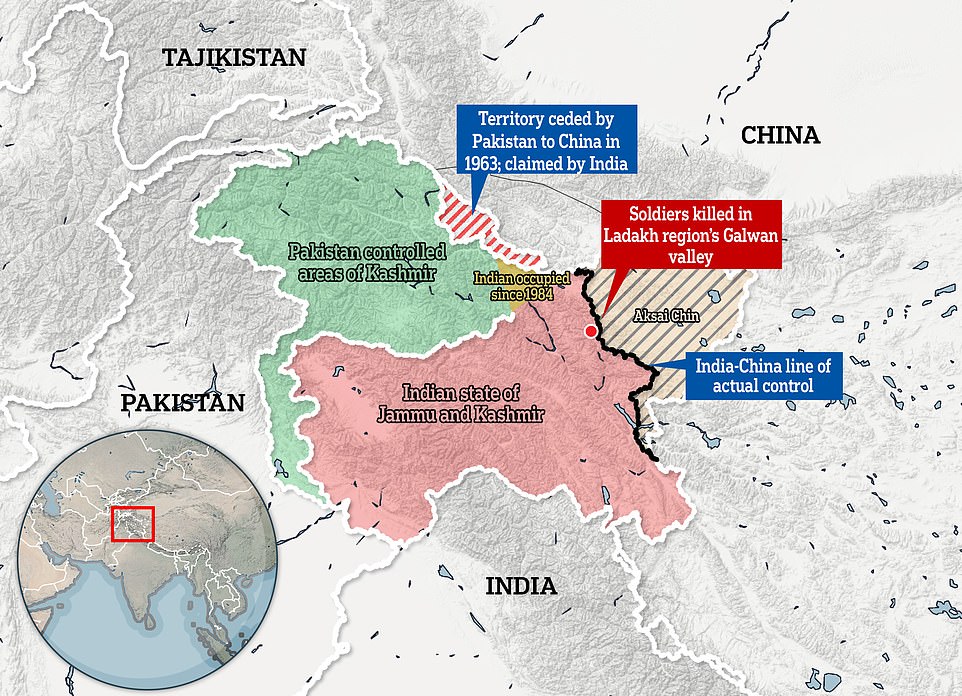 Also on Friday, Mr Zhao said that China was not holding any Indian soldiers, without addressing media reports that China released 10 of them late on Thursday.

‘My information is that at present there are no Indian personnel detained on the Chinese side,’ Zhao said, according to an English version of his daily briefing posted on the ministry website.

Indian officials have denied that any soldiers were in Chinese custody.

Meanwhile satellite images appear to show China deploying new machinery and damming a river in the Himalayan mountainside where tensions boiled over into the worst violence on the border since 1967.

The machinery was sighted on Tuesday, having not been there a week before – and Indian media suggests the Chinese troops involved in Monday’s clash might have ‘surged’ from these positions.

One US-based expert said China appeared to be blocking the river which crosses the Line of Actual Control, a move which would frustrate Indian troops who have just built a new 200ft bridge on their side.

India says 20 soldiers were killed in what it claimed was a pre-meditated attack near the line which separates the world’s two most populous countries.

China blames Indian soldiers for provoking the conflict, which is thought to have left around 45 Chinese soldiers dead or injured. But US Secretary of State Mike Pompeo took India’s side last night, offering his ‘deepest condolences to the people of India for the lives lost’. 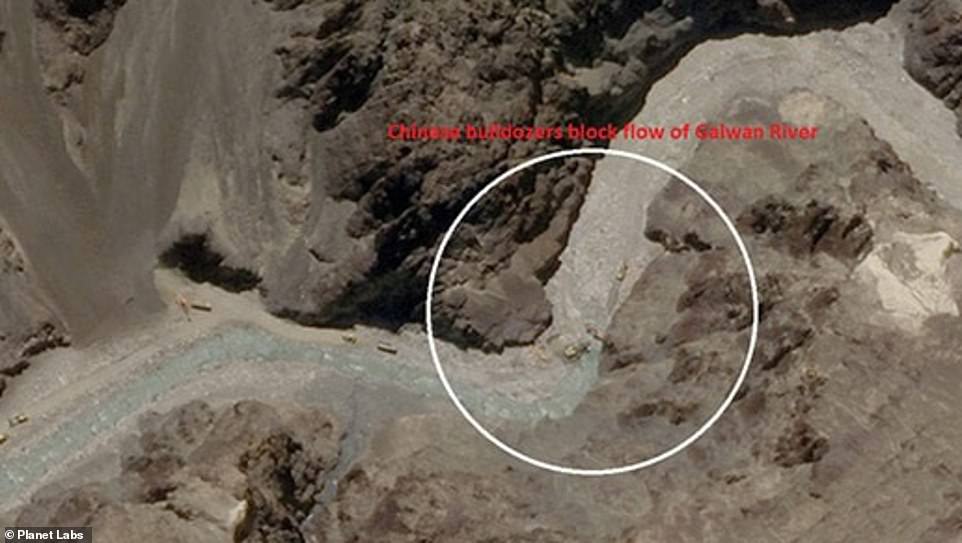 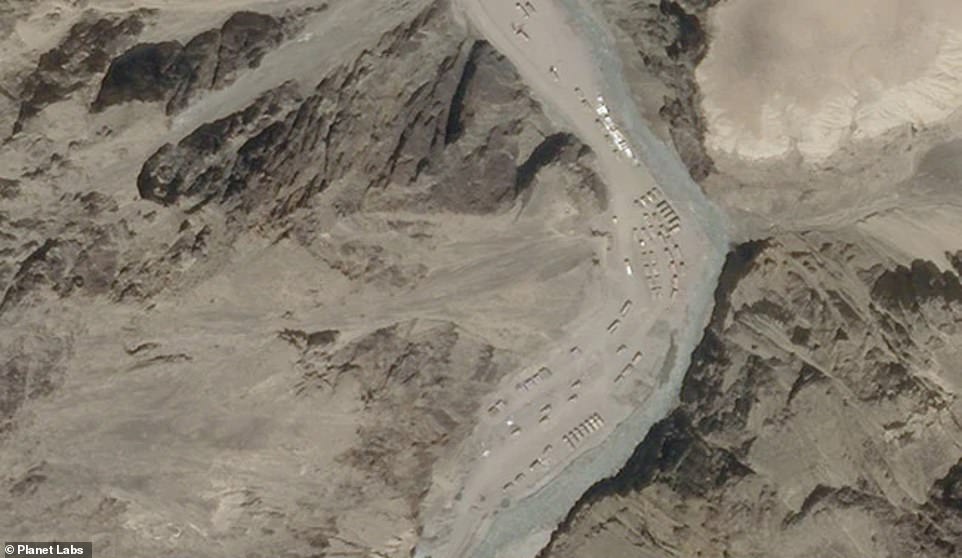 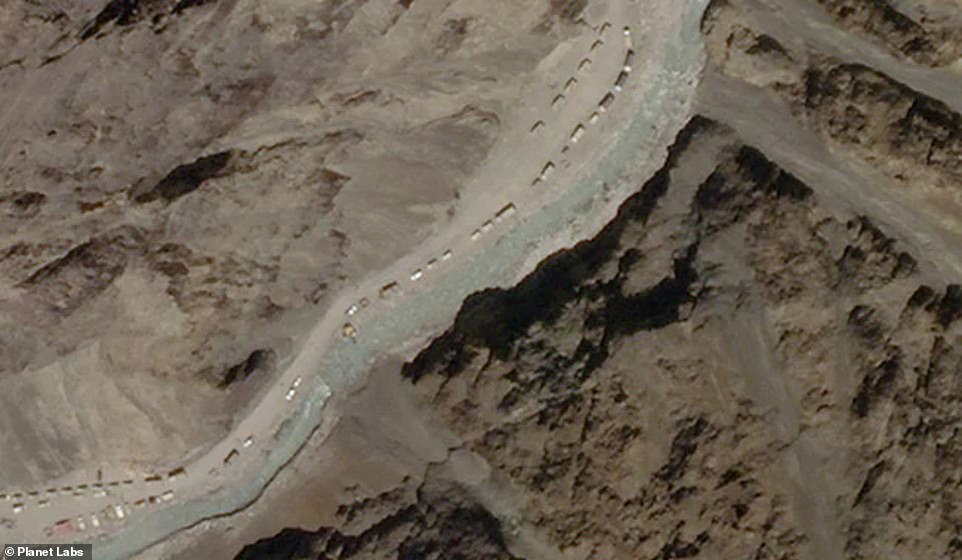 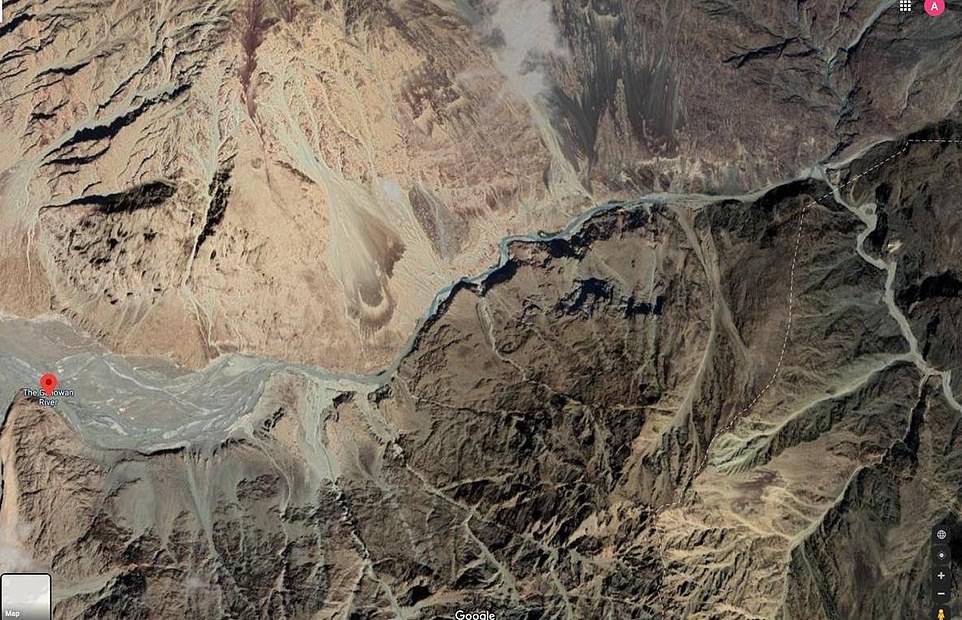 A satellite image from Google Earth of the Galwan Valley. No military forces are visible in this earlier image

The satellite pictures, taken by Earth-imaging company Planet Labs, show signs of altering the landscape of the valley through widening tracks, moving earth and making river crossings, one expert said.

‘Looking at it in Planet, it looks like China is constructing roads in the valley and possibly damming the river,’ Jeffrey Lewis, director of the East Asia Nonproliferation Program at California’s Middlebury Institute of International Studies.

The images also show machinery along the mountains and in the Galwan River.

According to the Hindustan Times, India has just finished building a 200ft strategic bridge over the river which allows for ‘rapid military mobilisation’ – but rerouting the river could make the bridge pointless.

‘We did not pause work on this bridge through the stand-off and kept working despite the violent face-off on June 15,’ a senior army officer was quoted as saying.

Indian broadcaster NDTV said the Chinese build-up also included ‘pre-fabricated huts for accommodation’ and a Chinese ‘motorcade’ near the site of the clash.

Chinese foreign ministry spokesman Zhao Lijian said he was unaware of the specifics on the ground but claimed that the Indian army had crossed into Chinese territory in several places in recent days.

Soldiers have been facing off on the border in the barren, uninhabited mountains since early May amid claims of intrusion on either side.

Under an old agreement between the two nuclear-armed powers, no shots are fired at the border, but there have been sporadic fisticuffs in recent years. 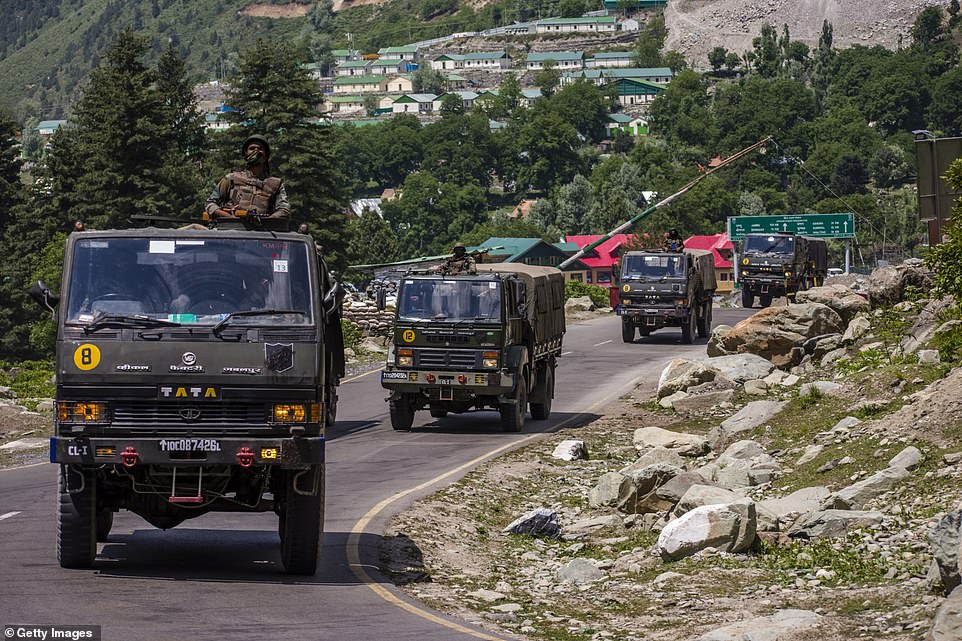 An Indian army convoy driving on a highway leading towards the Chinese border yesterday, four days after the deadly clash in the Himalayas which saw the worst violence on the border since 1967 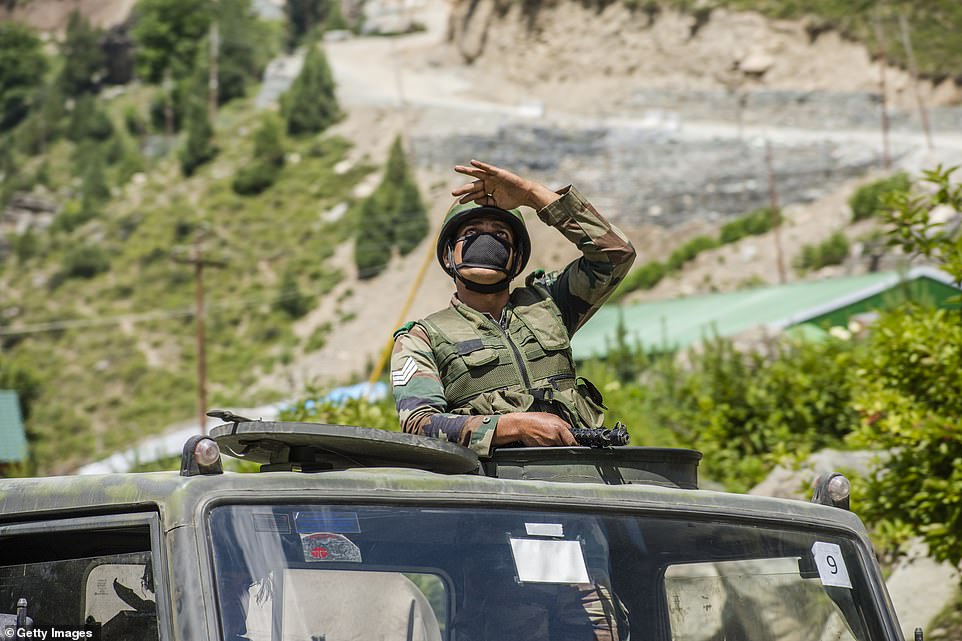 An Indian army soldier looks towards an Indian fighter plane from a convoy of trucks making their way towards Leh, a town in the Indian-controlled area of Ladakh 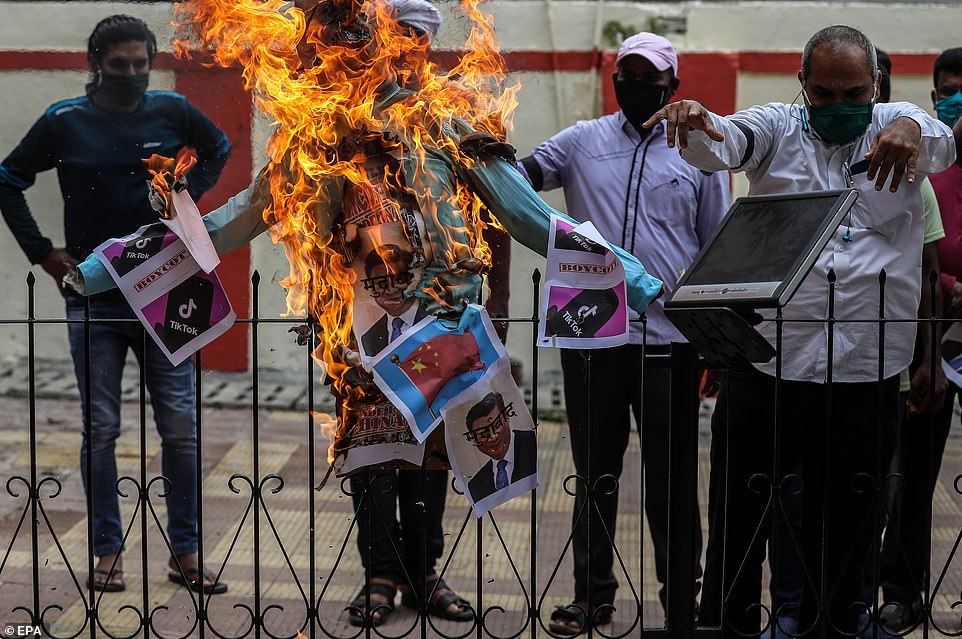 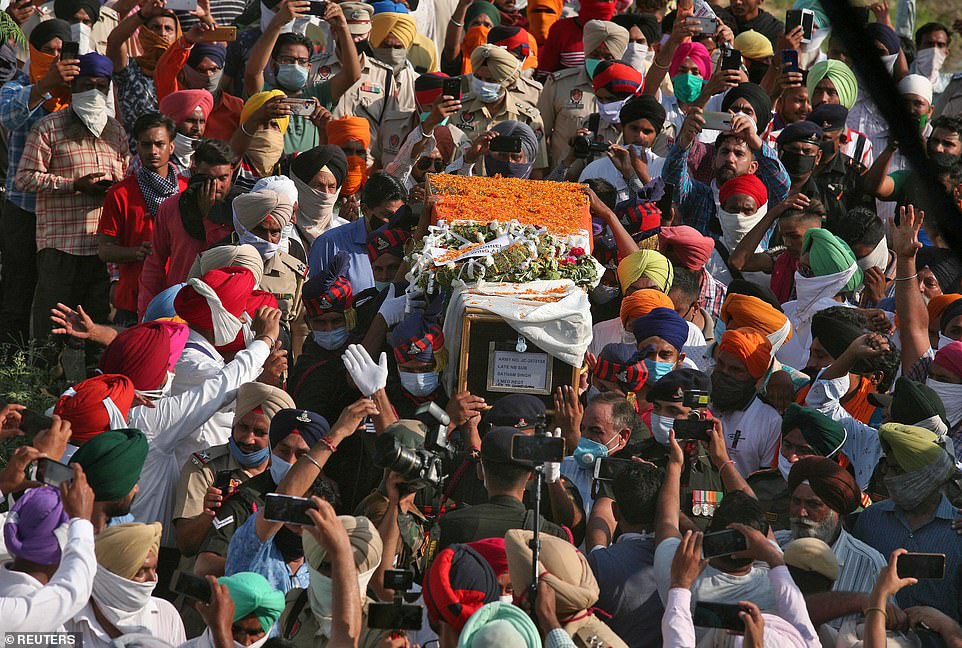 People carry the coffin of Satnam Singh, an Indian soldier killed in the border clash, during his funeral in Gurdaspur on Thursday

On Thursday Beijing released 10 Indian soldiers who were seized in Monday’s clash, ahead of fresh talks to ease tensions. India’s army said there were no remaining soldiers ‘missing in action’ after the troops were freed.

India says the dispute was triggered by a row over two Chinese tents and observation towers allegedly built on the wrong side of the line.

China had sought to erect a ‘structure’ on India’s side even after military officials had reached an agreement on June 6 to de-escalate, Indian foreign minister Subrahmanyam Jaishankar claimed on Wednesday.

Indian colonel Santosh Babu was one of those killed in the hours-long brawl, which is thought to have involved up to 900 soldiers.

Emotions were high in the southern city of Hyderabad, where thousands watched the colonel’s funeral procession on Thursday.

Post-mortems showed that the ‘primary reason for death is drowning and it looks like they fell from a height into the water because of head injuries,’ one Indian official said.

The clash has fanned growing anti-Chinese sentiments in India, which were already high because of the coronavirus pandemic.

Indian PM Narendra Modi said on Wednesday that ‘there should be no doubt that India wants peace, but if provoked, India will provide an appropriate response’. 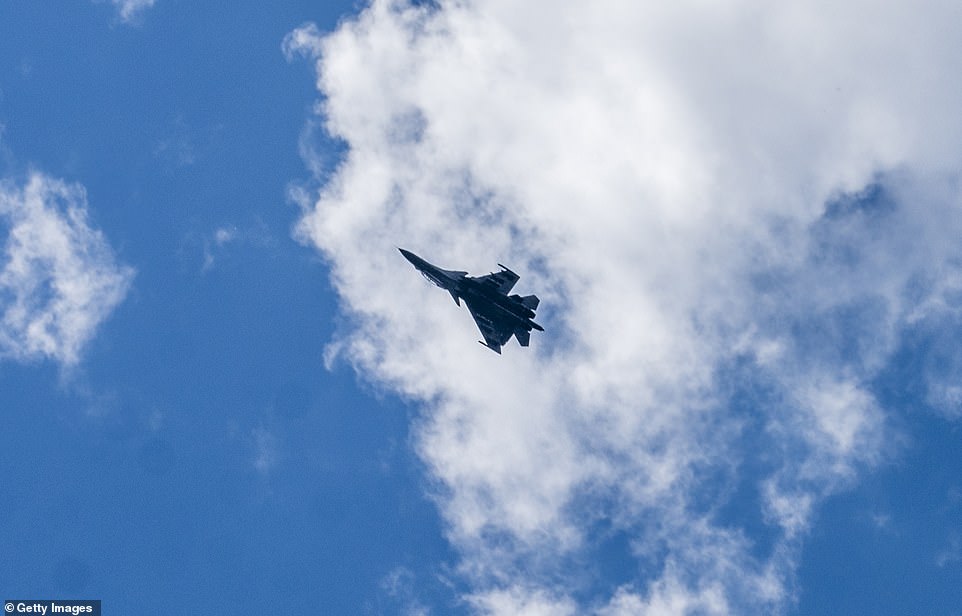 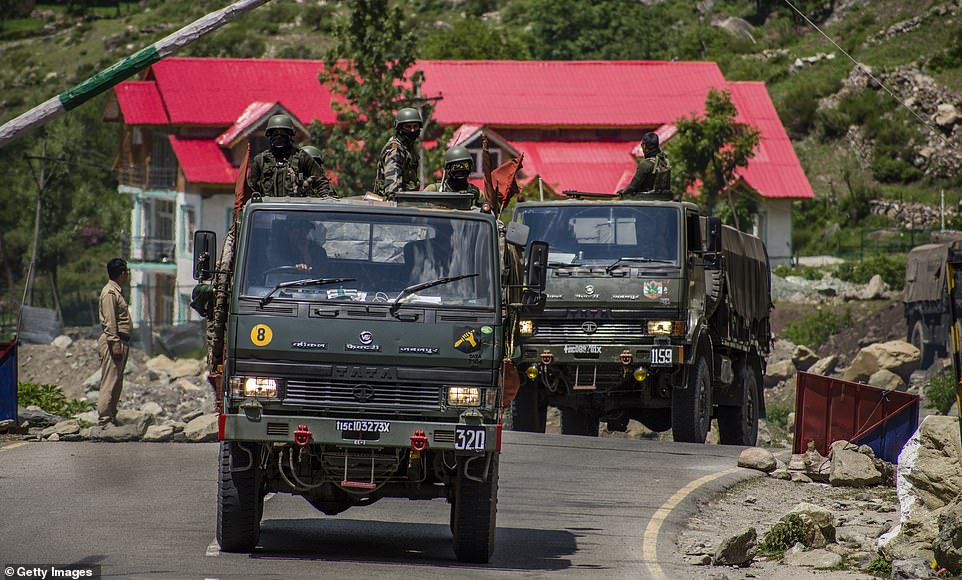 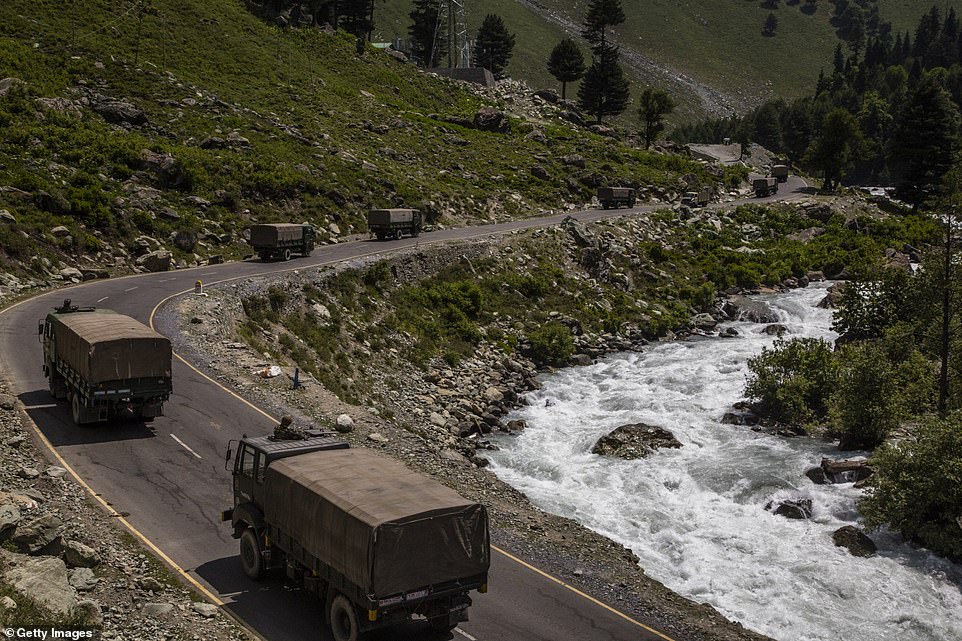 Nationalist Modi was elected to a second term following a campaign focused on national security after spiraling tensions with old enemy Pakistan.

Tension with China, whose economy is five times bigger than India’s and which spends three times as much on its military, has become Modi’s most serious foreign policy challenge since he took power in 2014.

He is now facing pressure to respond aggressively with the opposition and media demanding that India ‘push back’ against China.

‘There is a lot of pressure on the Indian side, the emotions are high among the public,’ defence analyst Rahul Bedi said.

‘It remains to be seen whether India will sit down at the negotiating table with China and say it will like to change these agreements to make them a little more aggressive or offensive in nature,’ he said.

Chinese foreign ministry spokesman Zhao rejected the Indian version of the events leading up to the clash. ‘The rights and wrongs of this incident are very clear. The responsibility does not lie with China,’ he said.

China rejects the allegation of intrusion and has asked India not to build roads in the area, claiming it to be its territory.

Unlike in India, the incident did not receive wall-to-wall coverage in China, where official media reported a statement on the incident from the Chinese army’s Western Command. 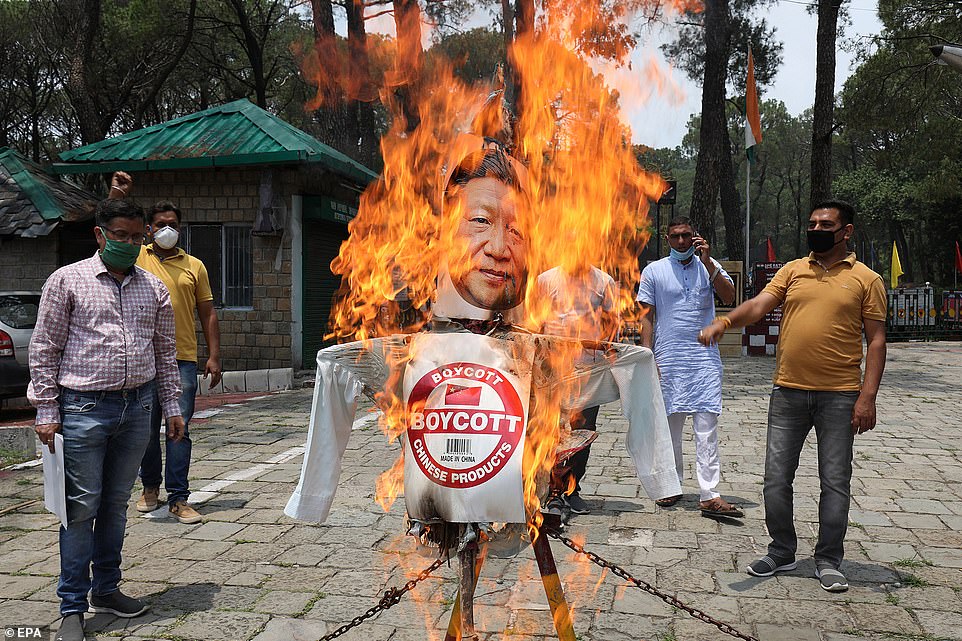 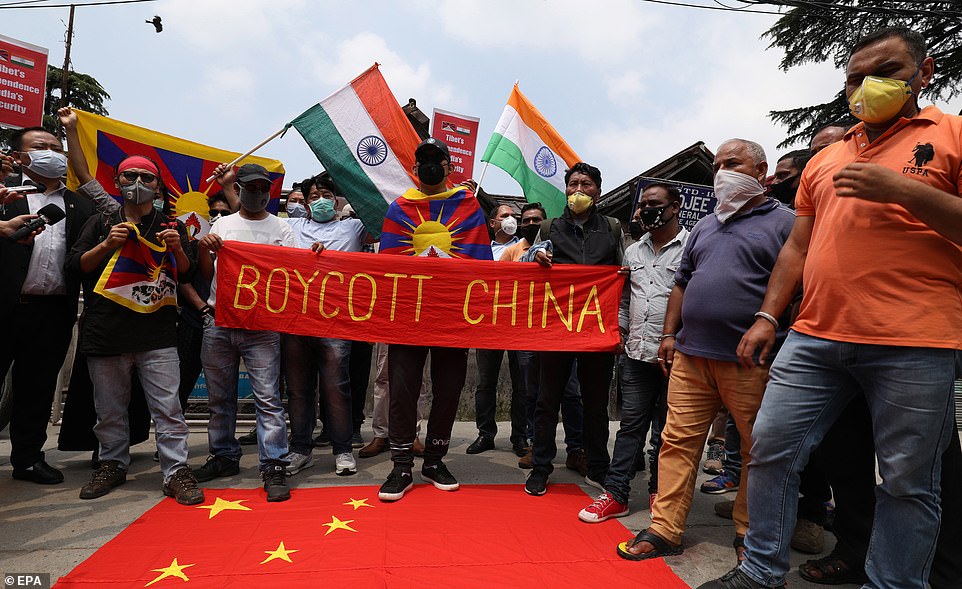 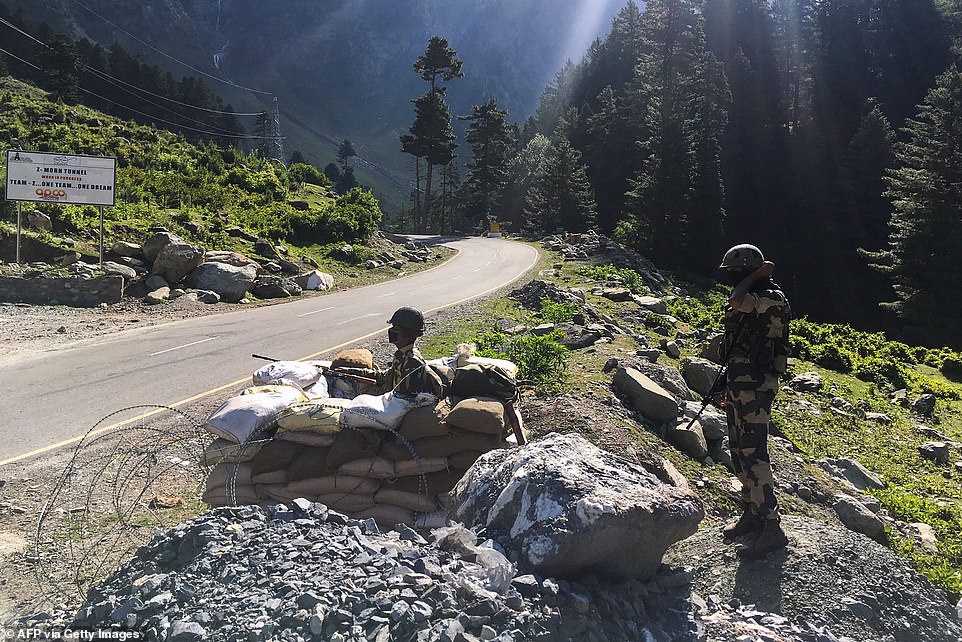