In a brief afternoon operation by the security forces on August 9, three militants were killed in Tral area of south Kashmir’s Pulwama district. The militants were reportedly part of the newly-formed Ansar Ghazwat ul Hind, affiliated to the al Qaeda. But a fourth person was also killed that afternoon, 16-year-old Mohammad Yunus Sheikh of Soimoh village in Tral.

“Post encounter, a huge mob pelted stones upon a [security forces’] camp,” the police said in a press statement. In the “law and order situation” that ensued, it added, “one person sustained pellet injuries and later on succumbed to his injuries”.

Sheikh was a Class 10 student. His family says the killing took place at least six kilometres away from the site of the encounter.Soimoh village is in mourning. On Friday, a tent was pitched outside Sheikh’s house for mourners. On the compound gate, some youth from the neighbourhood had pasted a message on a piece of paper. “May Allah accept your martyrdom,” the message read in Urdu. It signed off with: “What do we want?Freedom.” 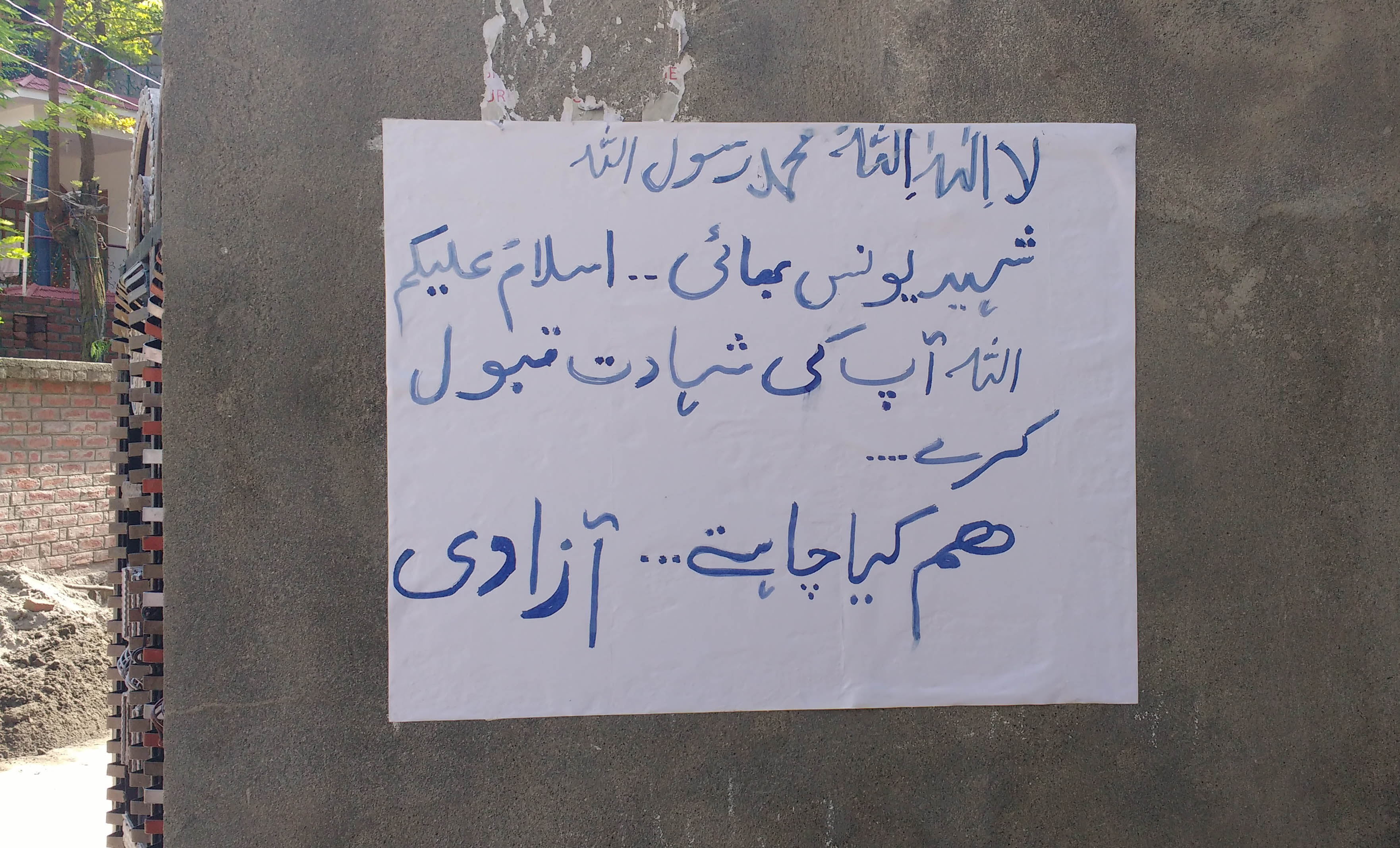 The message on the gate. The entrance to the house has two name plates, both prominently stating that the owner is a retired Naib Subedar of the Indian Army. Sheikh’s father, Mohammad Yusuf, sat with his relatives in a guest room furnished with a carpet and a single cushion. A wall clock presented by the Army, commemorating the Kargil War, stood out. A memento from the Jammu and Kashmir Light Infantry laid in a showcase and pictures of Mohammad Yusuf in fatigues brandishing his service weapons were turned away from gaze.

Mohammad Yusuf served in the Army for 26 years, with multiple postings in the Valley. He claimed to have served in the Kargil War as well. “He was a fauji kid, how would he be involved? He didn’t know stone pelting,” Mohammad Yusuf, now a security guard at a local bank, said of his son. A few moments later, however, he added: “Every child who grows up here has it in him. 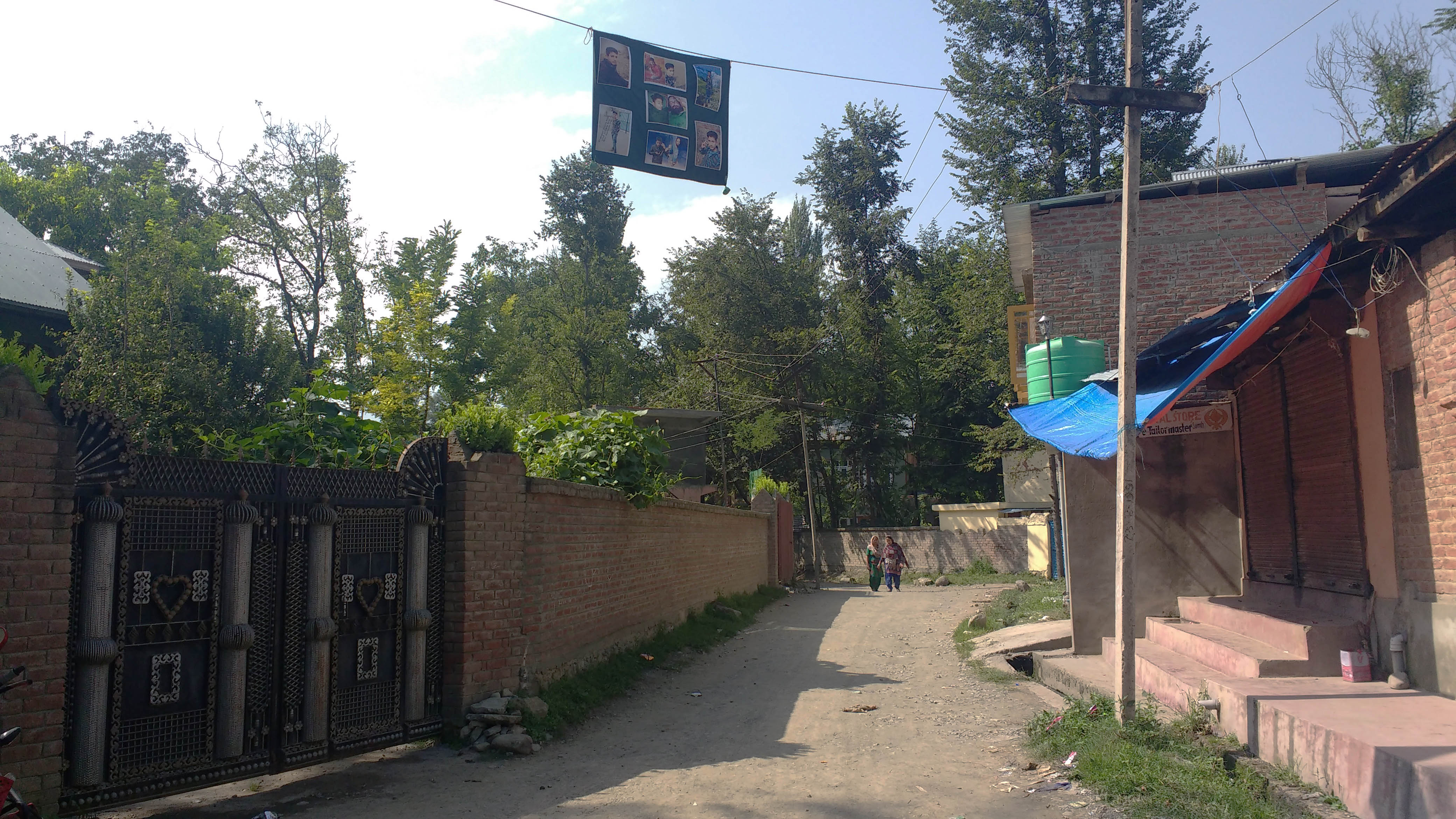 Even I say that. If we don’t say we want Azadi, who will let us stay here?”According to Mohammad Yusuf, Sheikh had lunch with his family on Wednesday and left home by 2 pm without saying where he was going. “A day before, he had been insisting to go to his aunt’s home,” he recalled. “He has cousins his age there whom he was very attached to.” Sheikh did not pay heed to his father’s concern that the situation outside was tense. Sheikh’s cousin Asif Hussain said the killing was the first in the area.

Mohammad Yusuf said the village had seen peace even during the peak of the militancy in the 1990s. The only recent turbulence had occurred when Sabzar Ahmad Bhat, a top commander of the Hizb-ul-Mujahideen, was killed near Soimoh on May 28. Bhat hailed from Rathsuna, which has almost merged with Soimoh as both villages have expanded in recent years. On Friday, Soimoh was calm, and its streets deserted.

A green banner hung over the street, pasted with pictures of young Sheikh. A picture of his dead body was placed next to Bhat’s, commemorating the two “martyrs”.The banner pasted with pictures of the slain boy. Why kill?Sheikh’s relatives said he was not only hit by pellets but also “targeted”. Hussain said Sheikh’s body bore pellet wounds in the chest and two bullets, in his chest and thigh. Police officials, however, deny Sheikh was hit by bullets. “Even if he was pelting stones, is this what you do to a young child?” Hussain asked.

“Is this what he [Sheikh’s father] deserved for serving the nation for 26 years?”Mohammad Yusuf said the killing of his son was an “injustice” that could have been avoided. “They [security forces] should have nabbed him and called me,” he said. “Why did they have to shoot him with pellets?. He was just 16. How far could he have run if they tried to catch him?”

“The Army would never do this,” Mohammad Yusuf added, blaming other security forces. “I have been part of the Army for so many years. The Army would resort to aerial firing to disperse a mob. They don’t shoot directly.”Mohammad Yusuf complained that the Army camp situated nearby has “ignored” him. Once, he said, the commanding officer of the camp had helped bring back his eldest son, who is 19 years old and mentally disturbed. The officer had spotted him wandering away from the village.

But after the death of his younger son, he added, the Army has not bothered to even offer condolences. “They didn’t even make a phone call,” he said. Aqib Bhat, another cousin of Sheikh who was sitting in the room with Mohammad Yusuf, added: “They are hifazati amla [security forces] only in name. In reality, they are the ones spreading terror in Kashmir.”