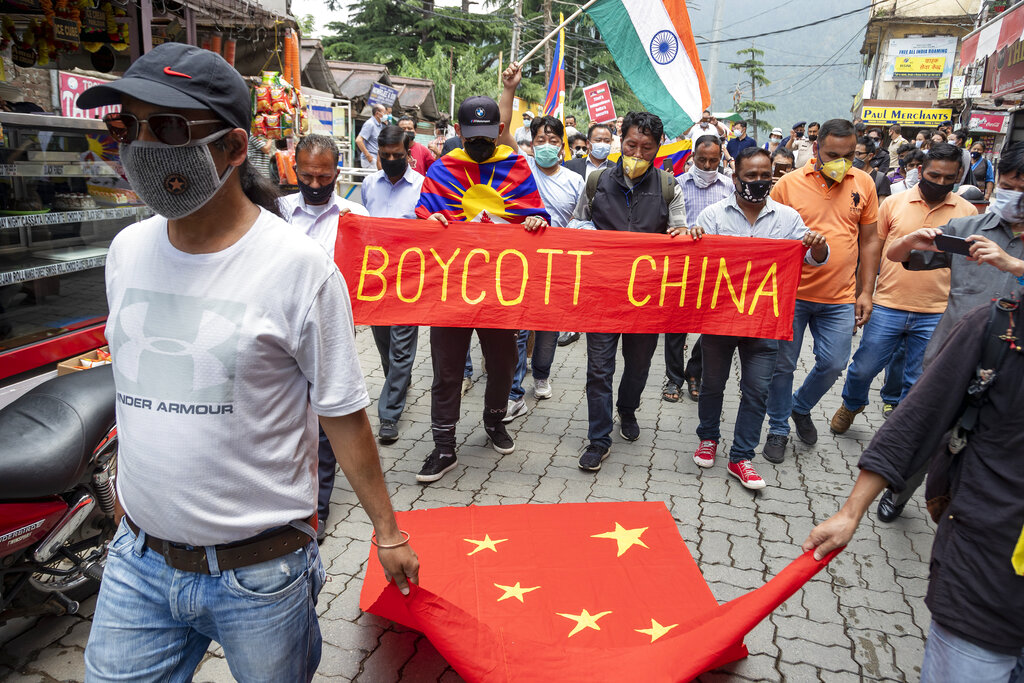 Exile Tibetans and local Indians participate in a protest against the Chinese government today in Dharmsala, India. India said Thursday it was using diplomatic channels with China to de-escalate a military standoff in a remote Himalayan border region where 20 Indian soldiers were killed this week. (AP Photo/Ashwini Bhatia)

NEW DELHI (AP) — India’s prime minister is meeting top opposition leaders Today as the government tries to lower tensions with China after 20 Indian soldiers were killed in a clash in a Himalayan border region.

India and China accuse each other of instigating the fight in the Galwan Valley, part of the disputed Ladakh region along the Himalayan frontier. China has not said whether it suffered any casualties in what was the deadliest conflict between the sides in 45 years.

Both countries said they were communicating through military and diplomatic channels and stressed the importance of their broader relationship. Experts say the two nations are unlikely to head to war, but easing tensions quickly will be difficult.

China today maintained its position that India is to blame for the clash.

“The right and wrong is very clear and the responsibility lies entirely with the Indian side,” Foreign Ministry spokesperson Zhao Lijian said.

Both India and China have denied media reports that Indian soldiers were in Chinese custody.

During Monday’s clash soldiers brawled with clubs, rocks and their fists in the thin air at 4,270 meters (14,000 feet) above sea level, but no shots were fired, Indian officials have said. The soldiers carry firearms but are not allowed to use them under a previous agreement in the border dispute.

Indian security officials have said the fatalities were caused by severe injuries and exposure to subfreezing temperatures.

The clash escalated a standoff that began in early May, when Indian officials said Chinese soldiers crossed the border in three places, erecting tents and guard posts and ignoring warnings to leave. That triggered shouting matches, stone-throwing and fistfights between the opposing sides, much of it replayed on TV news programs and in social media.

The action has taken place along a remote stretch of the 3,380-kilometer (2,100-mile) Line of Actual Control — the border established following a war between India and China in 1962 that resulted in an uneasy truce.

The rules of engagement along the Line of Actual Control — which prohibit using live ammunition but also ban physical contact between soldiers — will have to be renegotiated, defense analyst Rahul Bedi said.

“There is a lot of pressure on the Indian side, the emotions are high among the public,” Bedi said.

“It remains to be seen whether India will sit down at the negotiating table with China and say it will like to change these agreements to make them a little more aggressive or offensive in nature,” he said.

India’s Defense Minister Rajnath Singh spoke to heads of various political parties on Thursday to develop a consensus on the situation. Today, Prime Minister Narendra Modi was set to host the leaders of more than a dozen opposition parties.

The main opposition Congress party said the country deserves to know the truth.

“It deserves a leadership that is willing to do anything before allowing its land to be taken,” it said in a statement.

The clash has fanned growing anti-Chinese sentiments in India, which were already high because of the coronavirus pandemic, which began in China late last year. India’s caseload has climbed to fourth-highest in the world.

Emotions were on display in the southern city of Hyderabad, where thousands watched the funeral procession of Col. Santosh Babu, one of the casualties in Monday’s clash.

An Indian business confederation called for a boycott of 500 Chinese goods, including toys and textiles, to express “strong criticism” of China’s action in Ladakh.

Taylor Fravel, director of the Security Studies Program at the Massachusetts Institute of Technology, said China was trying to put pressure on India, and he didn’t think Beijing wanted a violent clash between their armies.

From a strategic perspective, Fravel said, China should want to drive a wedge between India and the United States to prevent any kind of counter-balance coalition.

“The deaths and the clash on Monday night will probably very quickly and much more rapidly push India closer to the United States, which I think is probably not what China wants,” he said.

G. Parthasarthy, a retired Indian diplomat, said that both China and Pakistan — India’s archrival — were aiming at low-cost containment of India. “China has a hangup against India and its civilization. For us to expect China will be a friendly neighbor …. It will never be a friendly relationship.”

India unilaterally declared Ladakh a federal territory while separating it from disputed Kashmir in August 2019. China was among the countries to condemn the move, raising it at forums including the U.N. Security Council. India was elected to the council this week.

Today’s breaking news and more in your inbox