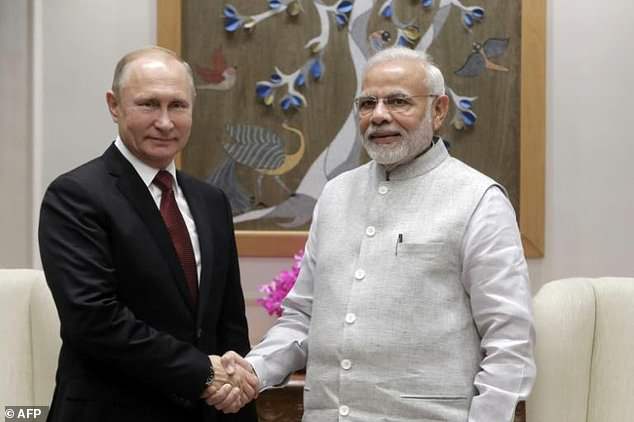 Russia and India’s leaders announced on Friday a raft of deals worth billions of dollars including for an air defence system, as New Delhi walks a tightrope between Moscow and Washington with a wary eye on China.

The flagship accord announced during a visit to India by President Vladimir Putin was for the formidable S-400 surface-to-air missile defence system, worth $5.2 billion according to an Indian source.

Other agreements — following a meeting between Putin and Prime Minister Narendra Modi that began with a hug — were in railways and fertilisers and space, with Russia undertaking to train astronauts for India’s first crewed space mission in 2022.

India’s decision to purchase the S-400 flies in the face of the United States imposing sanctions on countries buying Russian military hardware, as happened with China last month.

US-Russia ties are plumbing depths not seen since the Cold War, plunging further still this week as Western powers accused Moscow of orchestrating a brazen string of global cyber attacks.

However, Washington is in a tricky position with India, seeking to bolster ties with the Asian giant to counter China’s growing assertiveness, something which has also rattled New Delhi.

Last year India and China had a military standoff over a Himalayan plateau claimed by Beijing and Bhutan, a close ally of India.

China has also perturbed India by loaning large amounts of money to Indian Ocean countries where it has long held sway.

“It is also important for India to keep friendly relations with Russians so that they don’t completely move into the Chinese camp,” said Manoj Joshi from New Delhi-based Observer Research Foundation think-tank.

“Also, the fact is that unlike the US, Russian regional interests largely overlap with India’s regional policy,” he told AFP.

Washington and New Delhi announced plans last month for joint military drills in 2019, and agreed on the exchange of sensitive military information. The US is now India’s second-biggest arms supplier.

India therefore could expect to gain a sympathetic ear if it seeks a waiver from the US sanctions, but President Donald Trump’s administration has signalled this is unlikely.

Russia and India have been close since the 1950s and Moscow remains its biggest source of weaponry as it prepares itself for perceived potential threats from China and Pakistan.

India has also been irked by Trump’s decision to exit from the 2015 nuclear deal between major powers and Iran, a major supplier of oil to the fast-growing Indian economy.

Meanwhile Indo-Russian annual trade has slipped below $10 billion since 2014, as Modi cultivated closer diplomatic and economic ties with Washington, while Russia has courted Pakistan and China.

The president of state-run Russian bank VTB, Andrei Kostin, said in Delhi on Friday that the two countries aimed to triple the two-way flow of goods and services to $30 billion.

“We have a strategic partnership and a very harmonious dialogue at the political level,” Kostin told reporters.

“But we have to complete this with the strengthening of economic ties.”