‘They are saying my petition is an attack on Hindu religion.’
You pray in your home, there is no problem, but the school is a public institution run by government funds’ 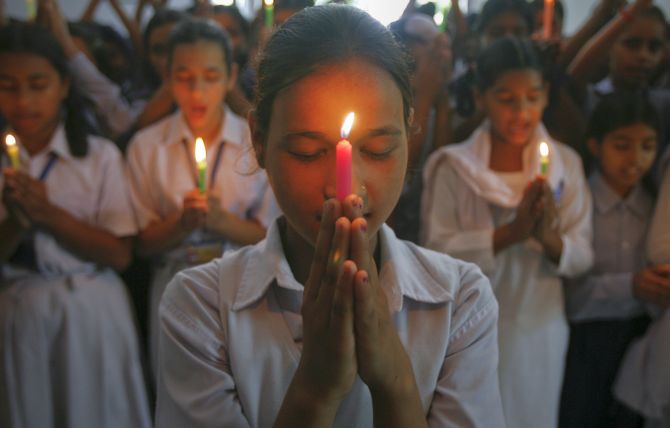 Kindly note the image has been posted only for representational purposes. Photograph: Ajay Verma/Reuters

Advocate Veenayak Shah has filed a petition in the Supreme Court seeking the ‘forthwith’ discontinuation of Sanskrit and Hindi prayers in government-run Kendriya Vidyalayas on the ground that it was based on the Hindu religion and was being imposed on students.

It also violated Article 28(1) of the Constitution prohibiting religious instructions in State-funded schools.

Jabalpur-based Shah’s petition challenged the Revised Education Code for the KV Sangathan which made attendance at the prayers compulsory. Another litigant in the matter was the Jamiat Ulema e Hind.

Started more than 50 years ago, there are today more than 1,100 KV schools across the country imparting a centralised education system.

Appearing on behalf of the government and rebutting the petition, Solicitor General Tushar Mehta said the prayers — Asatoma Sadgamayu (lead us from untruth to truth), and Sahana Vavatu (may the supreme deity protect us) — were not religious in nature, but represented universal truths.

After hearing the petition on Monday, January 28, 2019, Justices R F Nariman and Vineet Saran felt it raised matters of ‘seminal importance’ and decided to refer the questions raised in the petition to a Constitution Bench. It was then duly referred to the Chief Justice of India for listing it before a larger bench.

“In the USA, when religious prayers stopped in schools, scientific culture developed in society after which there was progress in that country. If we adopt the same scientific temper, our country too will progress,” Shah tells Rediff.com‘s Syed Firdaus Ashraf.

Why have you filed a petition in the Supreme Court that there should be no prayers in Kendriya Vidyalayas?

Prayer is a religious practice. And the Constitution of India, via Article 28, says that no religion instruction shall be provided in any educational institution wholly maintained out of State funds.

In this scenario I appealed in the Supreme Court stating that holding religious prayers in schools run by State funds violates Article 28 of the Indian Constitution.

In a similar instance in the United States of America, one man had petitioned that religious prayers must not be held in schools run by State funds as the USA is a secular country. And the supreme court of America agreed with that viewpoint and passed a judgment. Now this practice of prayers has been discontinued in American schools run on government funds.

What is the problem if children say slokas in Sanskrit before school begins?

I am not against Sanskrit. I am against prayers being said in any language — be it Urdu, Bengali or any other language.

My objection is to prayers and they must not be conducted in government schools as it is run on State funds.

Now the BJP-RSS (Bharatiya Janata Party-Rashtriya Swayamsevak Sangh) want to communalise this issue by stating that I am targeting Sanskrit prayers. But these things are being done to divert from the main issue.

Religion is a personal matter and the Constitution of India says so by stating that everyone has a right to practise his or her religion and at the same time, it also says those who do not want to practise any religion or to be an atheist, they have the right to do so.

As an atheist I have the right not to pray to any supernatural power.

You mean you have the right to be an atheist following, say, the Charvak school of thought.

Yes, that is the point. I want to follow that and the Constitution of India gives me that right.

And if a school tells me to pray, then I don’t want to do it as my personal conscience does not allow me to do it.

They have made prayers compulsory in Kendra Vidyalaya schools by saying Sanskrit slokas. Making it compulsory in government schools violates the Indian Constitution.

But this Sanskrit prayer move was brought in by the UPA (United Progressive Alliance) government in 2012, why did you wake up now?

Government-run schools have been conducting prayers since 1950 and not from 2012. I too was astonished to learnt this fact. It is just that nobody noticed it, including me.

According to the Constitution of India we must discontinue this practice of prayers in government-run schools that are run on State funds.

Moreover, if the USA can stop prayers in schools, why can’t India?

Article 51(A)(h) of the Indian Constitution speaks of scientific temper, humanism and the spirit of inquiry and reform so we must promote these values. On the contrary we are not promoting scientific temper but taking the country back to ancient times.

In the Supreme Court, it is written ‘Satyamev Jayate‘, truth alone triumphs, which is a part of Indian culture. Now you cannot say don’t put up such ancient slokas.

On Monday, this point was raised in the Supreme Court of India, that the place where the Chief Justice of the Supreme Court sits it is written ‘Yato Dharma Tato Jaya (Where there is dharma there is victory)’. This is written below the Ashoka symbol. Now in reality nowhere does the Ashoka symbol say the words ‘Yato Dharma Tato Jaya‘.

And what are you talking of Satyamev Jayate? it has no religion connotation. It only means that truth alone triumphs.

And if something like ‘Yato Dharma Tato Jaya‘ is written in the Supreme Court, then there should be an impartial inquiry as to whether this is against the Constitution of India.

Who gave the orders to write that in the Supreme Court of India? And should that kind of statement continue to be written?

But if you see Sanskrit prayers, they talk about peace in the world and respect for elders, etc. So what is wrong if the children are taught those prayers?

There is nothing wrong in teaching good things. I have no objection to that. But then you tell children to fold their hands and give them religious education also. This is being done to motivate children to (the Hindu) religion.

When you say such things it looks like you are against the Hindu religion.

Political parties want to colour my petition with Hindu-Muslim issues. They are saying my petition is an attack on the Hindu religion.

You pray in your home, there is no problem, but the school is a public institution run by government funds. Where am I saying that you don’t pray in homes?

I said it because there are madrasas run on government money and the same holds true for Christian schools which get subsidies from the government. These schools too have Islamic and Christian prayers, but you don’t object to that.

The children who go to such schools go with the permission of their parents. At this moment nobody has noticed the issue that you have asked in your question.

Now let me see what judgment comes out of my ongoing case. Only then will I follow up a case with madrasas and Christian schools.

But your fight could be never ending. Many government offices and even police stations display religious symbols.

That too is wrong. The police station is also run on government funds. The Constitution of India does not say that any government will believe in one religion, but it will have to be secular.

The PM of India is on official work and in a secular country these things should not be done.

We as a society should follow the scientific path as written in our Constitution. These puja acts by Modi encourage blind beliefs in our country.

Doing puja and lightning lamps is very much a part of Indian culture, so why are you associating it with religion?

You do these things at your home, no one will object to it.

Tomorrow if there is a collector who is a Muslim and he says he will offer namaz with a congregation in his office, will anyone agree to that? The answer is ‘no’ because the place belongs to the Government of India and not to the collector. This is what the Constitution of India says.

What will you achieve by stopping prayers in government-run schools? How will children benefit?

In the USA, when religious prayers stopped in schools, scientific culture developed in society after which there was progress in that country.

If we adopt the same scientific temper, our country too will progress.

Instead of wasting time on prayers we must spend more time on studies, that will be good for the children as they will learn new things in life.

Instead of going to other countries to buy missiles, in future we will make those things in India only.