NEW DELHI: India is finally close to approving the over $800 million (around Rs 5,700 crore) deal for two more “Phalcon” airborne warning and control system (AWACS) aircraft from Israel, which comes soon after it inked a Rs 4,577 crore contract for air defence radars with the Jewish state.

Reinforcing Israel’s status as one of the top arms suppliers to India, the armed forces are also looking to induct additional “Heron” surveillance and armed drones as well as “Harop” killer unmanned aerial vehicles, which act as cruise missiles by exploding into enemy radars and other targets, from the country. 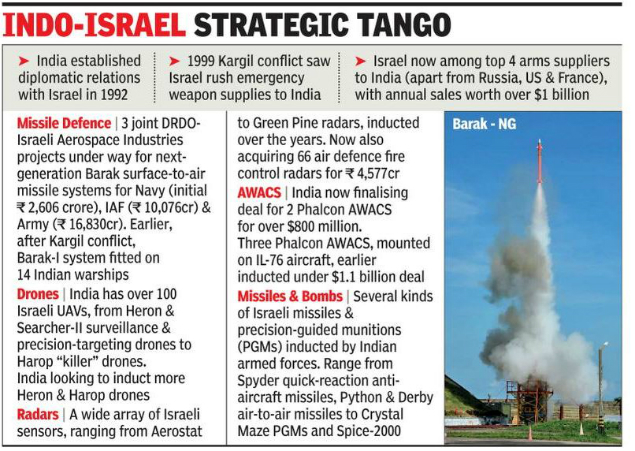 With Israeli Prime Minister Benjamin Netanyahu keen to visit India in mid-February, Tel Aviv is also pushing for a renewed deal for the “Spike” anti-tank guided missiles (ATGMs). This comes after India in late-2017 cancelled a proposed Rs 3,200 crore deal for 8,356 medium-range Spike missiles, 321 launchers and 15 simulators after DRDO said it could deliver a more technologically advanced man-portable ATGM within a couple of years, as was reported earlier by TOI.

In another mega contract worth an estimated Rs 12,640 crore, Israeli firm Elbit Systems is also competing with Nexter Systems of France for suppling India with 400 towed 155mm artillery gun systems, which is to be followed by another 1,180 such guns to be made in India.

But that is in the future. For now, India recently inked the Rs 4,577 crore deal with Israeli Aerospace Industries for 66 fire control radars, with maintenance transfer of technology. These 3-D surveillance and tracking radars will replace the aging Flycatcher radar systems present with the Army’s Air Defence Corps.

Then, IAF’s long-pending quest to induct two more AWACS, with Israeli Phalcon early-warning radar systems mounted on Russian Ilyushin-76 heavy-lift aircraft, is now being examined afresh by the finance ministry after being cleared by the defence ministry. “The Cabinet Committee on Security, of course, will have to give the final nod,” said a source.

IAF had inducted the first three Phalcon AWACS in 2009-2011 under a $1.1 billion deal inked by India, Israel and Russia in 2004. But the finance ministry had objected to “the high costs” involved in the new deal for two more AWACS, which have now been “brought down” through extensive negotiations, said sources.

Considered potent “eyes in the sky”, AWACS can detect and track incoming fighters, cruise missiles and drones much before ground-based radars as well as direct friendly fighters during air combat with enemy jets.

But India has lagged in this crucial sector. Compared to its three Phalcon AWACS and two indigenous “Netra” mini-AWACS, China has around 30 such systems, including Kong Jing-2000 “Mainring”, KJ-200 “Moth” and KJ-500 aircraft. Pakistan, in turn, has eight Chinese Karakoram Eagle ZDK-03 AWACS and Swedish Saab-2000 AEW&C, and is on course to get more from China.