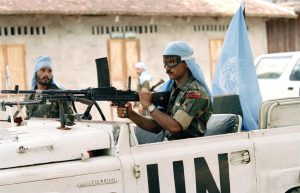 United Nations Transitional Authority in Cambodia soldiers from India patrolling the streets in Prey Veng Province in Cambodia on the second day of voting in national constituent assembly elections, May 24, 1993.

India joined the United Nations Security Council (UNSC) as a non-permanent member on January 4, beginning a tenure of two years. But New Delhi hopes that this time its presence in the UNSC will help move the organization towards the ultimate reform: a permanent seat on the UNSC for India.

A permanent seat in the UNSC will give India immense power and influence in global decision-making, and also further some of the country’s key interests. It would help India influence multilateral decisions whenever there is a conflict afoot – a benefit that most Indians underestimate, despite the fact that large numbers of Indians overseas have often been haplessly caught in the crossfire, from Libya to Yemen. And if India manages to get a veto, that would be an unparalleled bargaining chip in New Delhi’s international negotiations.

The Narendra Modi government, therefore, takes this effort very seriously – and in the run-up to the start of India’s UNSC term, there were forceful statements from the very top. Last September, Modi complained in the UN General Assembly that his country has not been adequately rewarded for its participation in UN peacekeeping. “Till when do we have to wait,” he asked. In December, Foreign Minister S. Jaishankar lashed out at those scuttling reform at the UN. “The problem we have today about narrow representation at the leadership levels of the UN is in many ways a challenge to its credibility and its effectiveness,” he said.

But as passionate as these appeals are – and as ridiculous as it might seem that the world’s largest democracy is not a permanent part of the UN’s decision-making body – none of these arguments go far enough. The case for UNSC reform can only be made if India becomes so relevant and integral to international security that the UNSC is meaningless without it. And if India wants to be so integral to the UNSC, it would need to make itself more relevant to UNSC business – beyond simply sending its soldiers to peacekeeping missions.

Get briefed on the story of the week, and developing stories to watch across the Asia-Pacific.

The purpose of the UNSC is to make difficult and politically sensitive decisions on matters of international security – and these are often issues that are far from India’s shores. Africa is the most dominant item on the agenda: In 2018, for instance, over 50 percent of UNSC meetings, 60 percent of its outcome documents, and 70 percent of its resolutions with enforcement mandates concerned African peace and security issues, according to the Institute for Security Studies Africa. Even in 2020, amidst the pandemic, most UNSC meetings dealt with conflicts in various parts of Africa – from Somalia to Sudan and from Mali to Guinea-Bissau.

Indian foreign policy discourse is starkly withdrawn from these debates and New Delhi plays almost no role of its own in any of these conflicts.

India has also long pursued a policy of silence on most of the other burning issues in international security which UNSC permanent members are often concerned with, from nuclear proliferation in Iran and North Korea, to human rights violations in Syria. When it speaks, India’s statements are often vague and ambiguous, meant to deliberately play both sides of any conflict and fearful of consequences in case it takes a clear stand. On Iran, for instance, India has both sympathized with United States for its sanctions and found ways to build a strategic partnership with Iran. In countries like Syria, it has often struggled to make a choice between standing for human rights and standing for state sovereignty.

But this practice of foreign policy only helps to defeat the case for India’s permanent inclusion in the UNSC. For one, if New Delhi does not play a meaningful decision-making role in any of the UNSC’s matters of interest, no country would have an incentive to support India passionately enough to prevent a veto on its membership from China. And far from working in India’s favor, New Delhi’s tendency to walk the tightrope on sensitive political issues only serve to weaken its influence; when a large country plays both sides, it makes both parties anxious and distrustful of its objectives and intentions.

As an elected member of the UNSC, India now has a chance to correct its course on all these fronts. India should try to play a more proactive role on sensitive political issues around the world, taking enlightened and coherent policy stances at the UNSC on international security challenges. But making statements in New York won’t suffice; the Modi government should also usher in greater internationalism back in New Delhi and widen Indian foreign policy discourse and strategic thinking to include problems that plague millions in Africa, the Middle East, and elsewhere.

If Modi is serious about UNSC reform, he has to reform Indian foreign policy first.