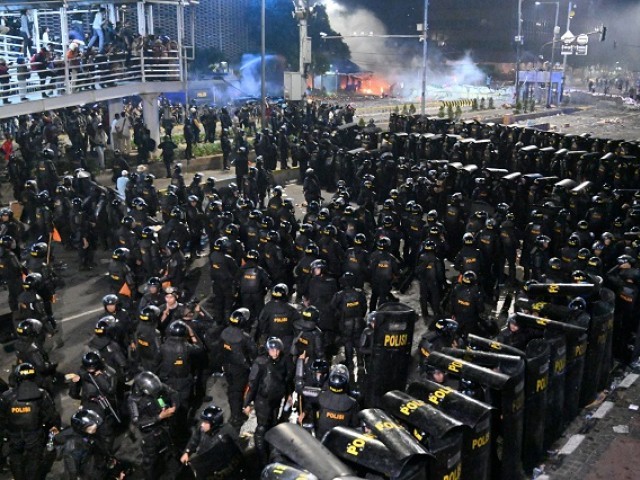 Riot police stand guard during a demonstration against the re-election of Indonesian president in Jakarta on May 22, 2019. PHOTO: AFP

JAKARTA: Tens of thousands Indonesian troops were deployed on the streets of the capital Jakarta on Thursday, as a deadline approached for a presidential challenger to file an appeal over claims of widespread cheating in last month’s election.

At least six people were killed — reportedly including a 17-year old high school student — after two nights of rioting as police clashed with protesters opposed to the re-election of President Joko Widodo.

The violence has been fanned by claims from Widodo’s rival Prabowo Subianto, a retired general, that the April 17 poll was a fraud.
Indonesia’s election commission on Tuesday confirmed Widodo had beaten Subianto who has until early Friday to file a formal challenge at the Constitutional Court.

Indonesia steps up security ahead of presidential election result

The 67-year-old has appealed for calm and said he would pursue legal channels to contest the results, as he did, unsuccessfully, against Widodo in 2014.

Election officials and analysts have discounted Subianto’s claims.
But many of his supporters appeared convinced of rampant cheating in the world’s third-biggest democracy, after India and the United States.

The streets of the capital were relatively quiet on Thursday with police and military personnel keeping a close watch on the heart of the city, including the election supervisory agency building — the centre of much of the violence — and the presidential palace amid fears of more unrest.

Authorities have blamed the violence on ‘provocateurs’ that they claimed had come from outside Jakarta to stir up trouble.

The elections commission office has been barricaded with razor wire and protected by scores of security personnel for days.

Since the violence broke out, the volume of online hoaxes and fake news linked has spiked in the world’s biggest Muslim majority nation, including claims that police raided a mosque. Authorities have denied the claim.

Among the half dozen dead was a 17-year-old high school student and a 19 year-old, according to local media.

Authorities said the victims died from gunshot or blunt force trauma, but denied that they fired live rounds on the crowds.