Defence ministry spokesperson Swaranashree Rao Rajashekar went on leave on Friday after a tweet by her appeared to criticise former Navy Chief Arun Prakash and triggered outrage among military veterans. 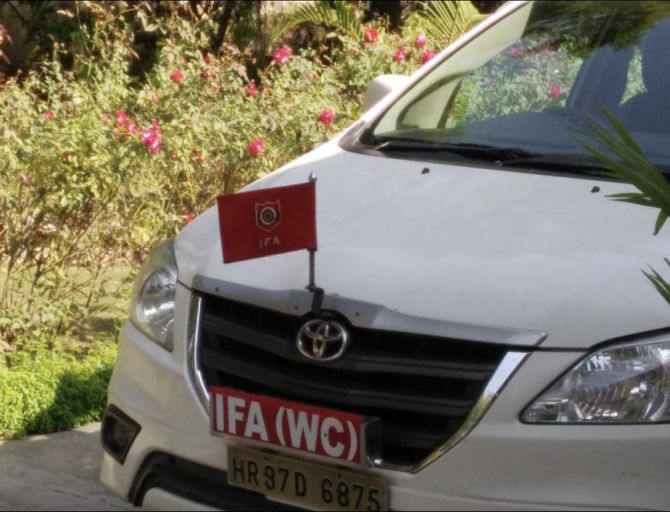 Former Navy Chief Arun Prakash retweeted thsi image showing a military flag on the bonnet of an official car of the Internal Financial Adviser to the Western Command of the Army in Chandimandir in Haryana. Photograph: Kind courtesy @payyaboy/Twitter

The defence ministry in a tweet said, “Col. Aman Anand, took over as the acting Official Spokesperson of MOD as the Spokesperson proceeds on leave.”

Sources said Rajashekar was asked to go on leave as her tweet, criticising misuse of privileges by military officials, left the defence ministry red faced. She had posted the tweet while responding to a comment by the former Navy Chief. The tweet was later deleted.

What about misuse of jawans in your residence during an officer’s tenure sir? And how about children being picked up and dropped to school in Fauji (military) gaadis (vehicles)? Not to forget Madam’s shopping expedition on government vehicles. And endless parties…who pays for that?” she tweeted.

Her tweet from the handle of defence ministry’s spokesperson came after Admiral Prakash retweeted a photograph showing a military flag on the bonnet of an official car of the Internal Financial Adviser to the Western Command of the Army in Chandimandir in Haryana.

No civilian officer is allowed to use military flags on their vehicles.

As the tweet by the spokesperson drew angry reactions from military veterans, she deleted it saying, “The tweet was inadvertently done and the same is deeply regretted please.”

“Even if misuse of an Army Command’s insignia by a civilian is not a cognizable offence, the person needs to be reprimanded by the GOC in C whose ‘Financial Adviser’ he is,” Prakash tweeted after retweeting the photograph.

Her response to 72-year-old Admiral Prakash, a war hero who was chief of Navy Staff between July 2004 and October 2006, drew sharp reactions from military veterans.

Some of them even said the principal spokesperson’s comments reflected the approach of the bureaucracy towards the armed forces.

“Is this inadvertent. It shows the true colours of your MoD Madam. You are meant to protect the military, not insult it. Keeping this spokesperson is an insult to India, its armed forces and their sacrifices. It shows no respect for senior veterans. Your spokesperson is a disaster,” he said.

“Dear @DefenceMinIndia @DrSubhashMoS – who is this ‘Defence spokesperson’ who reprsnts MoD ie govt n talks like this. This is unacceptable conduct n I wud rqst an enquiry into this. This is unconscionable, disrespectful n arrogance tht behooves a response. @PMOIndia (sic)” he tweeted.

Amid angry reactions by veterans, Admiral Prakash said there should be sober reflection on state of civil military relationship.

“Rather than getting excited over indiscreet tweet of @SpokespersonMoD I would suggest sober reflection; (a) by MoD on state of civil-mil relations & (b) by Military Leadership on the aspersions cast by MoD (IDAS?) civil-servant on personal conduct of Service officers,” he said.