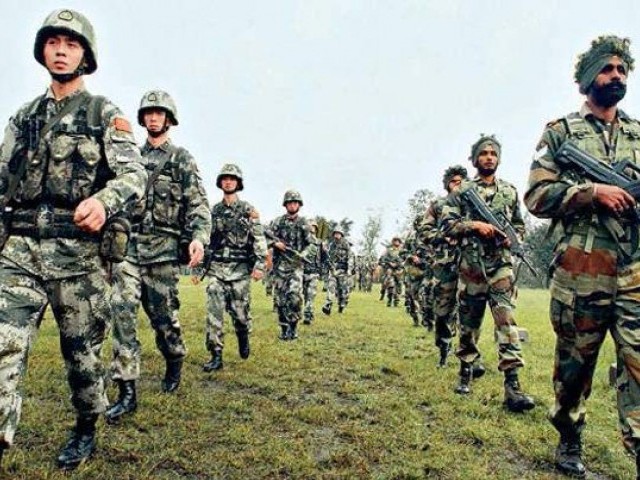 ISLAMABAD: Pakistan is closely monitoring the situation along the China-India border and expresses the hope that the military standoff between the two most populous and nuclear armed neighbours would be resolved in line with agreed understanding and mechanisms.

“We are closely monitoring the situation along the China-India border areas. We hope that the issue will be resolved in line with agreed understandings and established mechanisms to maintain peace and stability in the region,” Foreign Office spokesperson Aisha Farooqui told The Express Tribune on Wednesday

China and India locked horns at the Line of Actual Control (LAC), a de facto border between the two countries. The spokesperson also hoped that under the “impulse of BJP’s rightist ideology”, peace and security in the region would not be further imperilled.

While the spokesperson restricted herself from further commenting on the issue, other officials in a background discussion were more candid. They concluded that New Delhi’s “destabilising policy” was the main reason behind the current military standoff between the two countries.

As per the background discussions, Pakistan views the current standoff issue is much more than a simple border dispute between the two countries.

The standoff was triggered by India’s construction of roads and other military infrastructure in Ladakh, nestled between western Tibet and Azad Jammu and Kashmir. China views the Indian military structure as part of New Delhi’s plan to target China-Pakistan Economic Corridor (CPEC), a flagship programme of the country’s Belt and Road Initiative (BRI).

On May 5, the Chinese military intervened to stop India from building structure on a disputed territory. Mobile footage showing Chinese and Indian soldiers fighting with fists and iron rods went viral. In one video Indian officer pleading the angry Chinese soldiers to let them go. Similar incidents had also been reported in other border areas, including Sikkam.

“The response from China is measured and mature. Beijing has not given any irrational statement,” observed a senior Pakistani official, while blaming India for the current standoff. The official was of the view that such a standoff was imminent since India, under Prime Minister Narendra Modi, had been trying to change the status quo in the disputes with neighbours.

India not only has territorial issues with Pakistan but also unresolved boundary issues with other neighbours, including China and Nepal. “There is a push back from these countries to India’s expansionist approach,” the official added.

Another dimension of the current standoff is the larger strategic realignment taking place in the region. Officials here did not rule out the possibility of linkage between the China-India standoff and CPEC. Some observers believe that China, by flexing its military muscles, is sending a message to the opponents of the BRI.

India has been publicly opposing the CPEC, claiming that it passes through its territory. Islamabad and Beijing have dismissed the claims and made it clear that CPEC was mutually beneficial for the region and beyond. But India, in recent weeks, has upped the ante by repeatedly threatening to attack Gilgit-Baltistan and Azad Jammu and Kashmir.

Senator Mushahid Hussain Sayed, the chairman of the Senate Foreign Relations Committee, believes that there is a tit-for-tat move by China, following the US and Indian well-orchestrated campaign to target CPEC.

“But remember China will not compromise even an inch on its core strategic interests,” Mushahid said. He, however, was of the view that the current tensions between China and India would unlikely translate into major conflict.

The China, India military standoff is also being viewed in the larger context of renewed rivalry between the US and China. The US is building strategic ties with India with an aim to undermine the rise of China as the next global power.

China, through its state media, recently warned India to stay away from the cold war between Washington and Beijing. The editorial in one of the leading state-run publication suggested that China was convinced that India had been acting on the US behalf to undermine China’s interests.