India’s military may respond across the border if a terrorist attack on it is is linked to Pakistan, said Air Force chief Rakesh Kumar Singh Bhadauria on Monday.


“Whenever there is a terrorist attack on our soil, Pakistan should be worried and they were rightly worried. They have to stop abetting terrorism in India if they have to get out of these worries,” said Bhadauria when he was asked if the neighbouring country should fear retaliation for the encounter in Handwara in Jammu and Kashmir.


He also said that the armed force is constantly ready to deliver whenever called upon by the government. When asked if the Air Force is ready to take out any terrorist camp or launchpad across the Line of Control Bhadauria said, “If the situation demands so, of course, Indian Air Force is ready 24×7.” 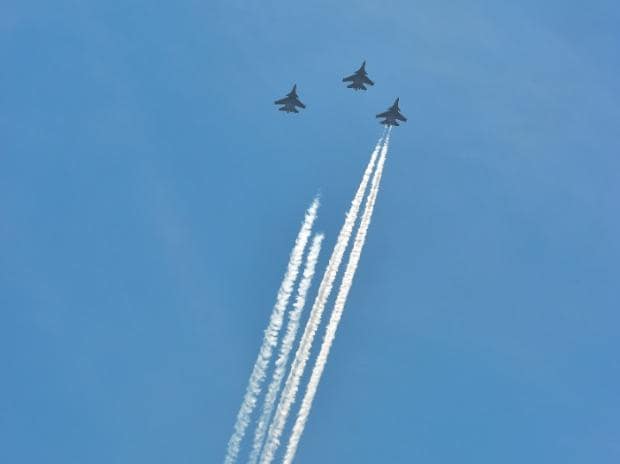 Three Su-30 aircrafts of the Indian Air Force fly in a formation over the Rajpath to express gratitude towards all frontline workers.


Two senior army officers – a colonel and a major- were among five security personnel killed in action during an encounter in Jammu and Kashmir’s Kupwara district in May. Army officer Colonel Ashutosh Sharma, Major Anuj Sood, Naik Rajesh Kumar, and Lance Naik Dinesh from the 21 Rashtriya Rifles unit were part of the security operation; police officer Shakeel Ahmad Qazi was also with them.


Defence Minister Rajnath Singh had earlier said that the Balakot airstrikes conducted by the IAF had sent out a clear message that infrastructure across the border could not be used as safe havens for terrorists. “If we’ve to be prepared for the tasks assigned to us, then it’s important we maintain credible deterrence at land, air, and sea at all times,” Singh had said.


The strike by India’s warplanes on a Jaish-e-Mohammad terrorist training camp in Pakistan on February 26 to avenge the killing of 40 paramilitary personnel in Kashmir and the Pakistani Air Force’s subsequent retaliation the next day triggered fears of a war between the two nuclear-armed neighbours.