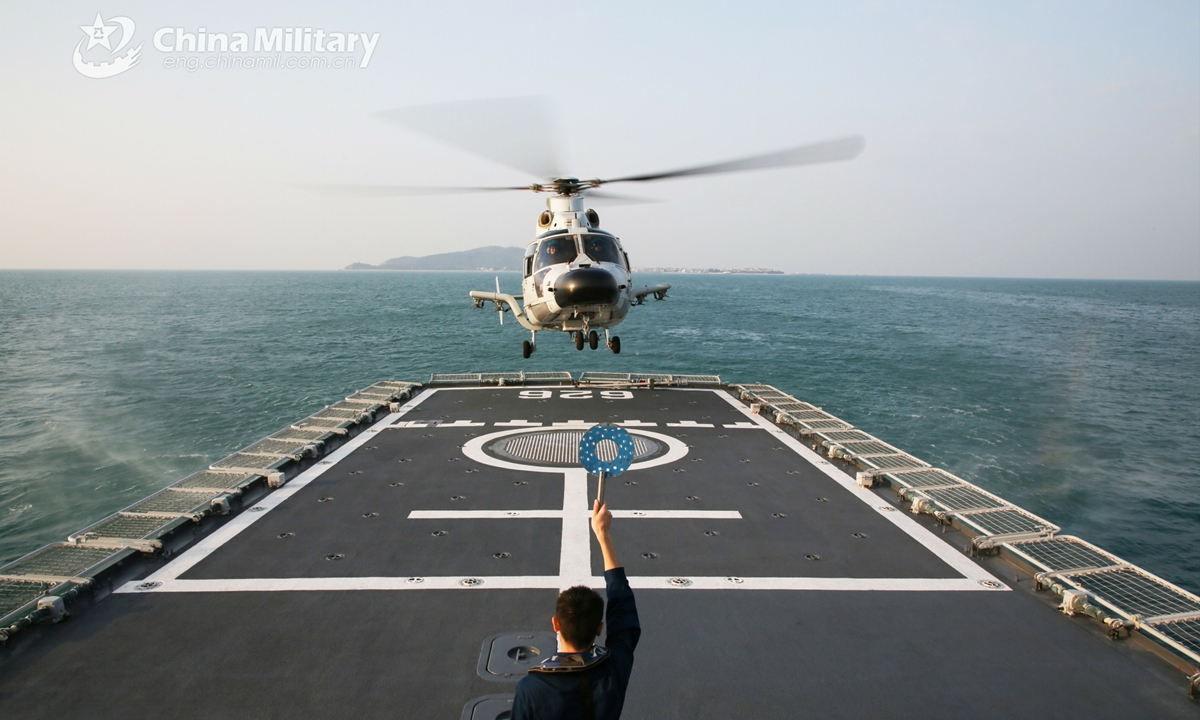 A ship-borne helicopter attached to a frigate flotilla with the navy under the PLA Southern Theater Command lands on the flight deck of the guided-missile frigate Wuzhou (Hull 626) under the guidance of a sailor during a maritime fire-fighting training operation in early December, 2021.Photo:China Military

According to monitoring from a Chinese think tank, the US military conducted highly intensive operations near China including aerial close-in reconnaissance, aircraft carrier drills and submarine activities over the past year, posing severe military threats and security risks to China in regions including the South China Sea and the Taiwan Straits, military experts said on Tuesday.

With US President Joe Biden on Monday signing a new defense bill that will see US military expenditure further expand with a particular focus on China, Chinese analysts predict further increase of US military activities targeting China next year, and said China should continue its efforts to safeguard national sovereignty and territorial integrity by enhancing its national defense development and troops’ combat preparedness.

US large spy planes carried out about 1,200 aerial close-in reconnaissance sorties on China, with some of them coming near 20 nautical miles of the Chinese mainland’s territorial baseline. US aircraft carrier strike groups and amphibious ready groups entered the South China Sea 13 times, more than doubling the activities of 2020, and at least 11 US nuclear-powered attack submarines were spotted in or near the South China Sea, including the Seawolf-class USS Connecticut, which had an accident in the region, according to monitoring from SCSPI.

Fu Qianshao, a Chinese military aviation expert, told the Global Times on Tuesday that the US military activities near China not only broke records in terms of numbers, but also in terms of how close they were to China.

These provocative activities could gather intelligence on the Chinese People’s Liberation Army (PLA) and prepare the US for a potential major military conflict with China, Fu warned.

China must stay highly vigilant, keep close eyes on them and take proper measures to counter them, including enhancing weapons and equipment as well as the level of training of the PLA, Fu said.

Song Zhongping, a Chinese military expert and TV commentator, told the Global Times on Tuesday that the intensifying US military activities pose increasing threats to China.

The US sees China as its top opponent and is trying to suppress it in all aspects including the military, Song said. “We must enhance our own combat capabilities in order to defend ourselves.”

Other countries from outside the region, including the UK, France, India, Germany, the Netherlands, Japan and Australia, also sent warships to enhance their presence in the South China Sea, while countries within the region including Vietnam, the Philippines and Indonesia also boosted military activities, according to SCSPI.

Hu said that while the main purpose of these military activities continues to be muscle-flexing and asserting their presence, and real military tensions are not as high, the biggest variable in the region’s military security lies between China and the US, since they deploy the most military platforms and have the fiercest confrontations.

Neither China nor the US is seeking a war with each other, but both are actively preparing for worst-case scenarios, Hu said, noting that the balance between avoiding military conflict and enhancing military competition is a subtle one, and accidents could happen, particularly when US troops are deployed in excess numbers and suffering from fatigue.

This will increase the risk of friction and conflict between the Chinese and US militaries, Hu wrote.

Biden signed the National Defense Authorization Act for fiscal year 2022 into law on Monday, authorizing $770 billion in defense spending, about 5 percent more than last year, including more aircraft and Navy ship purchases, strategies for dealing with Russia and China, as well as $7.1 billion for the Pacific Deterrence Initiative targeting China, and a statement of congressional support for the defense of Taiwan, Reuters reported.

With more funding available to the US military, it is expected that the total number, frequency and intensity of US military activities near China will continue to increase in 2022, Song said.

Concerning the Taiwan question, Hu wrote that the situation in the Taiwan Straits is closely related to that in the South China Sea, since the two regions are interconnected.

As the US and Taiwan authorities continued to stoke the situation, military security risks rocketed in the northern part of the South China Sea, as warships, submarines, survey ships, spy aircraft and fighter jets of different parties were seen operating in this region, particularly in the triangular area surrounded by Hainan Island, the Xisha Islands and the Bashi Channel, where US spy aircraft, surveillance ships and underwater forces have established a routine presence, Hu said, stressing that this has brought more uncertainties to the region.

The US will likely sell more weapons to the island of Taiwan, continue to help train the island’s armed forces or provide military intelligence, and expand military exchanges, including inviting Taiwan to join the US-led Rim of the Pacific exercise, Song said.

But these things are nothing new, and are of little military significance considering the PLA’s capabilities, Fu pointed out, noting that the US is now running out of cards to play.

Taiwan’s defense authorities said last week that the PLA had carried out more than 940 warplane sorties near the island since the start of 2021, and with more and more advanced weapons entering service, the PLA is gaining full capability to blockade and control the Taiwan Straits and deny foreign interference, media on the island of Taiwan reported on December 22.

In a latest survey among residents in Taiwan, more than 52.1 percent of people believe the Taiwan authorities are not ready for a war with the Chinese mainland, and 51.3 percent said they do not want to personally or let family members go to the battlefield, Taiwan media reported on Tuesday.

These are indications that countermeasures by the Chinese mainland are working, analysts said.

It is also worth mentioning that all of this is happening on the doorstep of China, not the US, Chinese experts pointed out.

The US is like a thief crying “Stop thief!” by creating so many military threats for China first while also hyping the “China threat theory” at the same time, while China only strives to defend itself, Fu said.