‘Evacuation’ has been key to disaster management in Odisha.
The aim is to achieve zero casualty.
Dillip Satapathy meets the two men who took up the herculean task of shifting people. 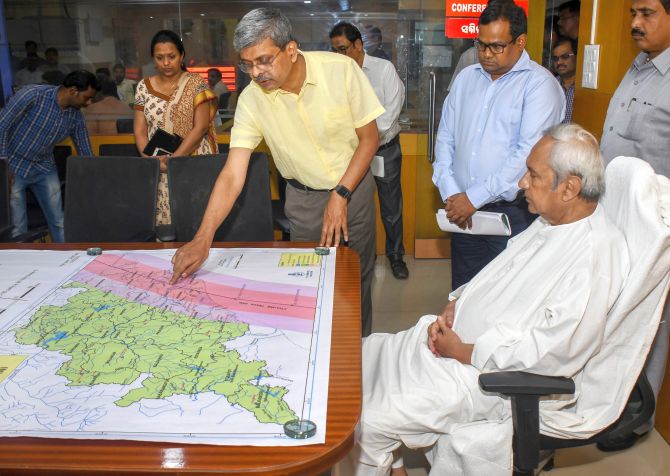 The sense of urgency is palpable as one enters the office of Special Relief Commissioner Bishnupada Sethi in Bhubaneswar.

Behind the L-shaped mahogany desk, Sethi is a man on a mission.

Cyclone Fani battered Odisha with wind speeds of 200 km per hour some time ago, but his phones haven’t stopped ringing.

“It has been very hectic for the last many days,” says Sethi.

As he briefs the officials about the preparations, people keep walking into his chamber with updates on relief operations.

In between the many calls and messages he receives on his landline and mobile phones, Sethi gives a lowdown on the killer Fani, which means ‘hood of snake’, and its aftermath. 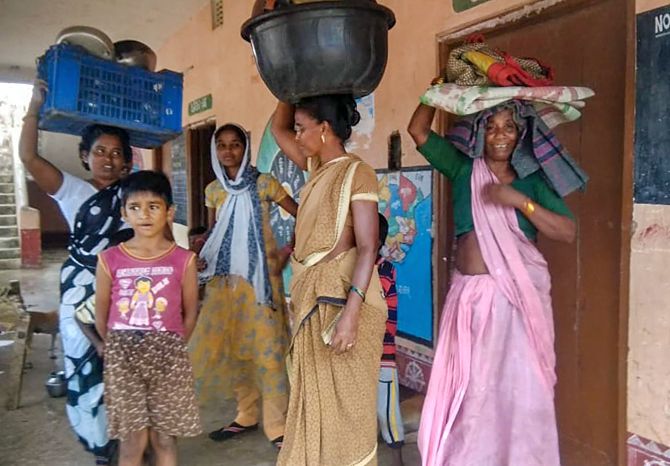 May 2, 3 and 4 were difficult not only for those living in the cyclone’s path, but also for officials in charge of disaster management.

Odisha Chief Secretary Aditya Prasad Padhi, who is heading the operations, has been on his toes since — first, tracking the approaching storm and ensuring quick and safe evacuation of the people and now supervising the relief and restoration work, along with Sethi. 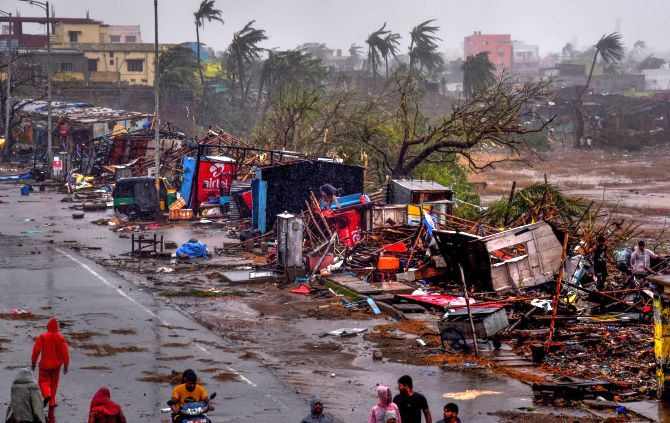 It is 20 years since the state was hit by a Super Cyclone — among the most destructive tropical cyclones in the north Indian Ocean, which claimed 10,405 lives.

That was a wake-up call for Odisha, which got down to improving its handling of natural disasters.

The official number of deaths due to Cyclone Fani is 41.

“In the last few years, we have had more than our share of storms,” says Padhi.

“We have managed well because of our preparedness, but we need community involvement.”

While the state got an early warning about the cyclone from the India Meteorological Department on April 27, “we came to know about its actual strength only on April 29,” says Padhi.

“Barring the districts that were going to polls in the last phase, we had activated the disaster mitigation machinery in the rest. Thankfully, in the worst hit areas of Puri and Bhubaneswar the polls were over.” 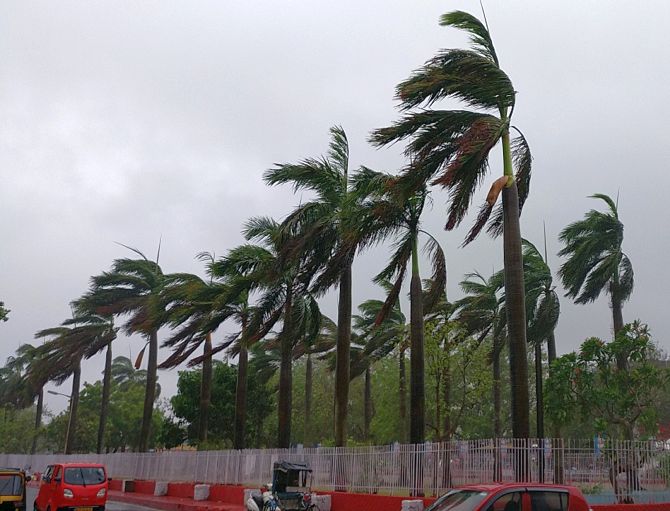 The anticipated gale speed was 110 to 120 km in Bhubaneswar, but it turned out to be much more.

However, the lessons in preparedness from the 2013 Cyclone Phailin came in handy.

Back then the state administration had moved 900,000 people out of impact areas — an effort that several international organisations, including the United Nations, had lauded.

Ever since, ‘evacuation’ has been key to disaster management in Odisha.

The aim is to achieve zero casualty — one that inspired the administration and a dedicated team of the Odisha State Disaster Management Authority to lay out and implement a robust plan to contain casualties in subsequent cyclones such as Hudhud (2014) and Titli (2018). 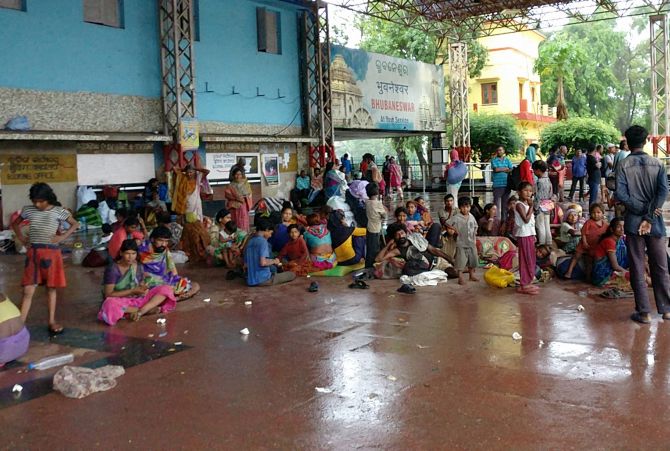 IMAGE: People take shelter during gusty winds ahead of the landfall of Cyclone Fani at the Bhubaneswar railway station. Photograph: PTI Photo

So when Fani came calling, the first priority was to shift people out of the danger zone.

The administration evacuated 1.5 million people across 19 districts in just 12 hours, setting a record of sorts.

It started on April 30. An article by Kristina Pydynowski and Eric Leister, two senior meteorologists at AccuWeather, warned of a very severe cyclonic storm heading towards Odisha, says Sethi.

“We immediately alerted everybody about the impending danger and went into a huddle to gear up for it.”

Though Sethi was aware about the formation of a cyclonic system in the Bay of Bengal, there was no clear information about its path of approach to land.

Initially, it was predicted to be headed for Chennai.

But mid-course it changed direction and careened towards the Odisha coast. 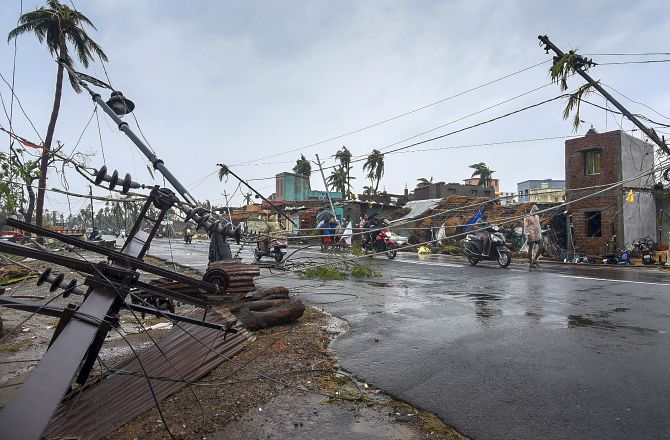 IMAGE: A view of the destruction caused by Cyclone Fani after its landfall in Puri. Photograph: PTI Photo

Odisha has not been hit by a cyclonic storm in the month of May in recent memory.

This is the time when the state usually starts preparations for possible calamities in the late monsoon.

So, nobody was sure about Fani’s course, intensity and likely impact, Sethi says.

“We were constantly in touch with the IMD, the US navy and the Bangkok-based Regional Integrated Multi-Hazard Early Warning System to track the cyclone’s progress and accordingly disseminate information to all the stakeholders responsible for disaster preparedness and mitigation work,” says Sethi.

The message from Chief Minister Naveen Patnaik at a meeting on May 1 to review the preparedness was unambiguous: ‘Every life is precious.’

In all, 12 IAS and 11 IPS officers were deployed to supervise the cyclone preparedness in the vulnerable districts.

A core committee of five senior officers was also formed with Padhi as its head, and pre- and post-cyclone responsibilities were delegated.

The last phase of the Lok Sabha election had just got over in the state on April 29.

And now the district administration had to be activated for disaster management.

The official machinery was told to evacuate people living in kutcha houses along the coast with women, children and the physically challenged being the top priority. 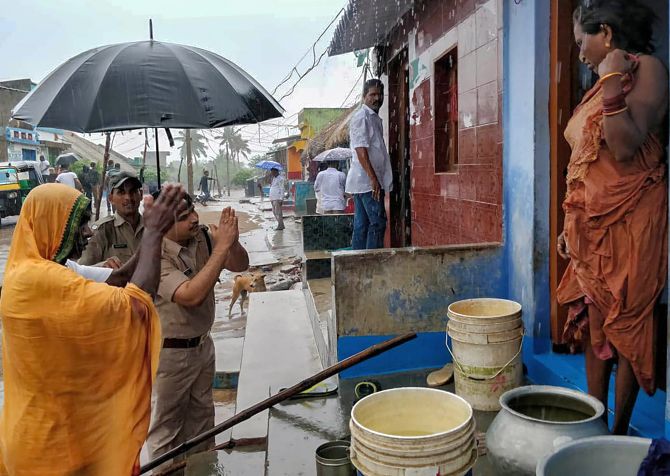 The first task was to send out messages to people about the calamity and appeal to them to move to safer places.

The state leveraged technology in a big way to this effect.

Luckily, the disaster management authority had commissioned an Early Warning Dissemination System in six districts and 22 coastal blocks in March this year.

The communication lines had been strengthened all along the 480 km coastline by putting up 122 towers with sirens and loudspeakers that could be heard up to 3 km away.

For three days, these broadcasts continued to alert the people.

And, the Location Based Alert System, which the authorities adopted, sent out warning SMSes to some 20 million people.

Not leaving anything to chance, Odisha had also adopted the Digital Mobile Radio (DMRadio) under EWDS to communicate with people at 166 locations in case conventional methods failed. 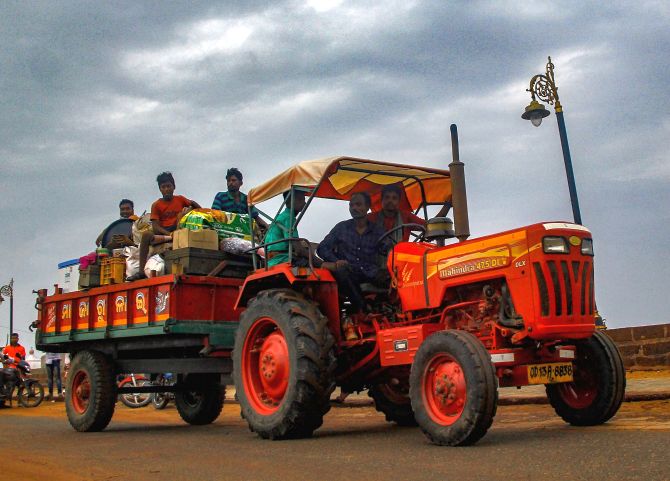 IMAGE: Villagers on their way to a shelter house on a tractor following evacuations as part of emergency measures taken before Cyclone Fani makes landfall in Puri. Photograph: PTI Photo

Despite these initiatives, shifting people was a herculean task.

Many were unwilling to leave their homes.

It took coaxing and even coercion to get them to one of the 5,000 designated safe places like cyclone shelters, schools and government buildings.

“We made arrangements for free kitchens, emergency lights and medicines at all these shelters,” says Sethi.

The administration also engaged thousands of its employees and volunteers — 50 for each cyclone centre — to convince people to move.

Pictures of Berhampur Superintendent of Police Pinaki Mishra going from house to house urging people to shift and Constable Pritismita Parida carrying two women on her bike in Kendrapara district to a cyclone shelter have since gone viral.

The state emergency operation centre, set up in Sethi’s office, functioned as the war room.

“All the cyclone tracking and disaster mitigation measures were monitored from here,” says Sethi, who spent the night of May 2, a day before Fani made landfall, in office.

“Everybody, starting from the chief minister to school teachers in villagers, was involved.” 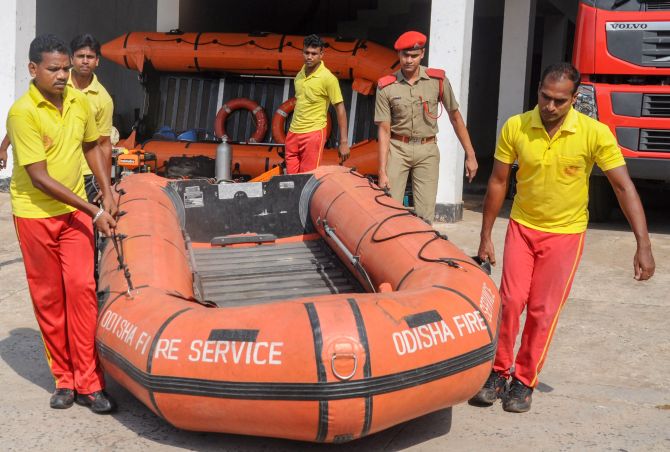 “We got information that over 20,000 migrant labourers were stranded in prawn farms in the Astarang and Kujang area. Being from outside Odisha they were not aware of the severity of the storm,” he says.

Prompt arrangements were made to get them out of harm’s way.

“The second was the evacuation of 25,000 tourists from Puri where Fani had made landfall.” 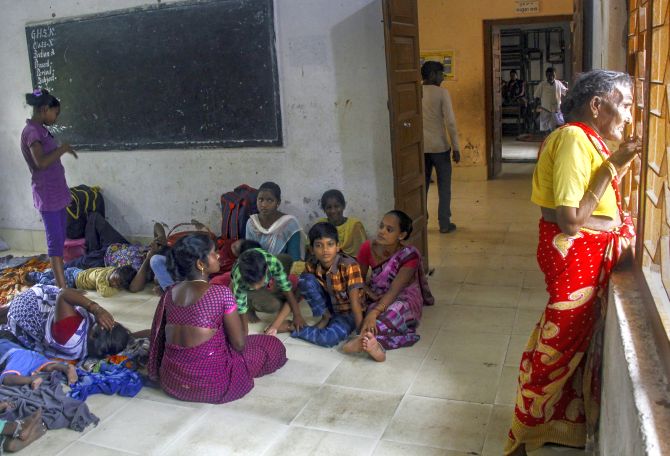 Though the government had ordered all schools and colleges to close, a private school in Bhubaneswar chose to remain open.

“We had to forcibly shut it down,” says Sethi said, adding, “Had that not been done, the casualty could have been higher.”

We have learnt our lessons from Fani, adds Padhi.

“We have been successful in evacuation, but we have to build a disaster-resilient infrastructure.”

For Padhi and Sethi, the work is clearly far from over.